“Health risk or not?” 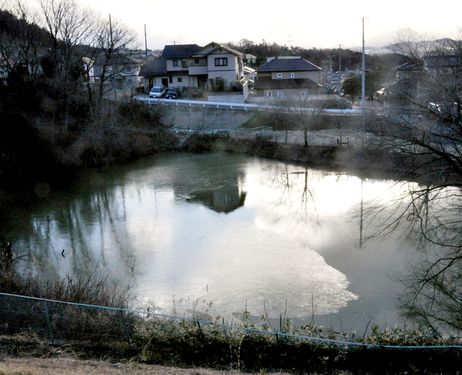 Radioactive cesium of mind-boggling 370,000 becquerels per kilogram of soil has been detected in the mud of the Myotoishi reservoir in Motomiya, Fukushima Prefecture. The reservoir is ringed by homes and a community center. (Shinichi Fujiwara)

FUKUSHIMA–Very high levels of accumulated radioactive cesium have been detected in the mud of hundreds of reservoirs used to irrigate farmland in Fukushima Prefecture, where agriculture is a key industry.

The finding comes as prefectural authorities continue to try to assuage public concerns of contaminated food following the triple meltdown at the Fukushima No. 1 nuclear power plant three years ago.

A joint survey by the prefectural government and a branch office of the farm ministry found that the levels exceed 8,000 becquerels per kilogram of soil in 576 reservoirs. In 14 of those cases, the level tops 100,000 becquerels.

The central government says that reservoirs, many of which are located in residential areas, are not covered by its decontamination program.

The survey covered 1,939 reservoirs, or slightly more than half of the 3,730 in Fukushima Prefecture for agricultural use.

Prefectural authorities, fearing that contaminated mud from the reservoirs may reach farmland and create a health hazard for residents, is asking the central government to remove the waste.

Contaminated soil exceeding 8,000 becquerels corresponds to designated waste that must be removed at the central government’s initiative.

According to the Environment Ministry, the amount of waste that exceeds 100,000 becquerels accounts for one-2,000th or less of all the debris produced as a result of decontamination work in Fukushima Prefecture.

The prefectural government and the Tohoku Regional Agricultural Administration Office of the Ministry of Agriculture, Forestry and Fisheries examined the mud of 1,939 of the reservoirs from February 2012 to last December. It was the first such survey to be done.

Officials said 108 of the 576 contaminated reservoirs are in zones where residents were evacuated due to the March 2011 nuclear disaster.

The remaining 468 reservoirs are located outside the evacuation order zones and still supplying water to rice paddies and other farmland. Those areas are mainly located in the central part of the prefecture, including the cities of Fukushima and Date.

Officials with the prefectural government’s farmland management section said cesium that was discharged from the nuclear plant immediately after the accident attached to dust in the air and fell to the reservoirs along with the rain. Cesium that ended up on surrounding mountains was washed down into the reservoirs along with earth and sand, they added.

“As reservoirs are shaped like earthenware mortars, it is easy for earth and sand to accumulate,” said an official of the section. “Because of that, contaminated soil in surrounding areas often ends up in the reservoirs, making their contamination levels high.”

In some of the reservoirs where cesium measurements were high, officials noted that water levels were lower in summer and, as a result, the mud was exposed to the elements. In those instances, the exposed mud posed a health hazard to residents.

However, the Environment Ministry says it has no plans to dredge the reservoirs to remove the contaminated mud.

“Radiation levels in the air (around the reservoirs) are not high enough to have an adverse effect on the health of residents,” said a ministry official in charge of decontamination work.

An official of the farm ministry’s disaster preparedness section stated: “The Environment Ministry is in charge of decontamination work. As such, we do not have any plans to decontaminate the mud in those reservoirs.”

The official made clear that the farm ministry’s job is only to provide information on the contamination levels of those reservoirs to the Environment Ministry.

The central government can order Tokyo Electric Power Co., operator of the Fukushima No. 1 nuclear power plant, to pay the costs of decontamination work based on the special measures law to deal with contamination caused by radioactive materials.

But if the farm ministry removed the mud from the reservoirs, the work would not be covered by funding for decontamination. As a result, the central government–not TEPCO–could be obliged to shoulder the costs.

According to calculations by the prefectural government’s farmland management section, the cost to decontaminate all of the reservoirs, including transportation of the waste to temporary storage sites, would be 15.4 billion yen ($154 million).

The central government has earmarked 260 billion yen for decontamination work in the budget for fiscal 2014 that starts in April.

Of the five reservoirs with cesium levels exceeding 100,000 becquerels in areas other than evacuation order zones, the mud in the Myotoishi reservoir in the Takagi district of Motomiya, some 55 kilometers west of the stricken Fukushima plant, had the highest contamination at 370,000 becquerels.

The reservoir sits in the central part of a 200,000-square-meter hilltop residential area with 392 households and a senior high school.

Cesium levels in the reservoir water are so low as to be beyond detection. The water is used to irrigate rice paddies and other farmland at the foot of the hill.

Rice farmer Tokuo Nemoto, 65, uses water from the reservoir to irrigate his 3,000 square meters of land under cultivation. Cesium levels in the rice he harvested after the nuclear accident are negligible.

Even so, Nemoto is worried.

“Our family has been using the reservoir since the days of my grandfather. If it becomes impossible to use it, I will not be able to cultivate rice,” he said with a downcast look.

Kiyoshi Ishii, 71, who lives near the reservoir and is head of the local community association, was unable to hide his anger.

“If the reservoir dries up and the dirt in the mud rises into the air, we will not be able to remain here. Does the administration have any intention to do something to prevent that from happening?”

According to Eisaku Shiratani, a researcher with the National Institute for Rural Engineering of the National Agriculture and Food Research Organization, the contamination is a pressing issue.

Shiratani, who is knowledgeable about water-related issue, noted that soil will accumulate at the bottom of reservoirs over time with the result that water depth becomes shallower. This carries the heightened risk of the soil becoming exposed to the air if water levels drop due to scant rainfall.

“The government should remove highly contaminated mud in reservoirs in residential areas as soon as possible,” he said.