Lest it be confused that Russia has somehow forgotten about the Ukraine coup, and that it no longer concerns the bread basket (and key gas pipeline hub) of Europe a core strategic resource, moments ago Russian wire services blasted the following diplomatic summary of Russian bullish grace in a china store:

President Vladimir Putin ordered an urgent drill to test the combat readiness of the armed forces across western Russia on Wednesday, news agencies reported, flexing Moscow’s military muscle amid tension with the West over Ukraine.

“In accordance with an order from the president of the Russian Federation, forces of the Western Military District were put on alert at 1400 (0500 ET) today,” Interfax quoted Defence Minister Sergei Shoigu as saying.

Putin has ordered several such surprise drills in various parts of Russia since he returned to the presidency in 2012, saying the military must be kept on its toes, but the geopolitical overtones could hardly have been clearer this time.

The western district borders Ukraine, which lies between NATO nations and Russia. Shoigu said the drill would be conducted in two stages, ending on March 3, and also involved some forces in central Russia.

Putin has made no public comment on Ukraine since President Viktor Yanukovich was driven from power over the weekend after months of political turmoil sparked by his decision to spurn deals with the European Union and improve ties with Russia.

The United States and European nations have warned Russia against military intervention in Ukraine, a former Soviet republic that Putin has called a “brother nation” and wants to be part of a Eurasian Union he is building in the region.

Russian officials have said Moscow will not interfere in Ukraine, while accusing the West of doing so, and Interfax cited the speaker of the upper parliament house, Valentina Matviyenko, as saying on Wednesday it would not use force.

But Prime Minister Dmitry Medvedev said on Monday that Russia’s interests and its citizens in Ukraine were under threat, language reminiscent of statements justifying Russia’s invasion of Georgia in 2008, when he was president.

In short, not only has the Russian bear woken from hibernation but is rather angry. Incidentally, Russia’s ever-louder war footing rumblings have not been lost on investors who sent the USD/RUB to the highest level since March 2009, just north of 36. 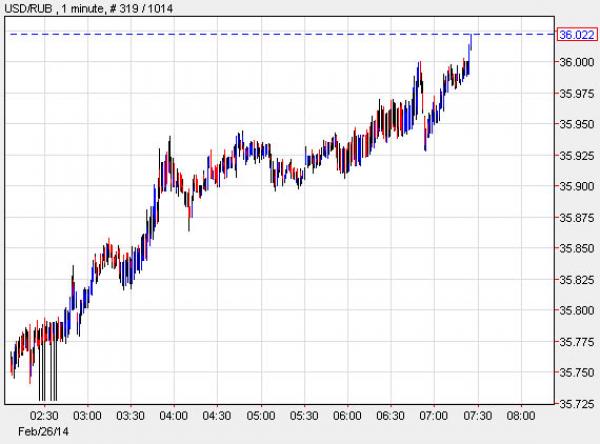 As for the Ukraine Hryvnia, don’t ask.

And now back to watching your regularly scheduled S&P500 all time high melt up. Becuase there is nothing at all concerning in the world.