Apparently all it takes to kick the world out of a secular recession and back into growth mode, is for several dozen finance ministers and central bankers to sit down and sign on the dotted line, agreeing it has to be done. That is the take home message from the just concluded latest G-20 meeting in Syndey, where said leaders agreed that it is time to finally grow the world economy by 2% over the next 5 years.

The final G-20 communiqué announced its member nations would take concrete action to increase investment and employment, among other reforms. “We will develop ambitious but realistic policies with the aim to lift our collective GDP by more than 2 percent above the trajectory implied by current policies over the coming 5 years,” the G20 statement said.

Australian Treasurer Joe Hockey, who hosted the meeting, sold the plan as a new day for cooperation in the G20.

“We are putting a number to it for the first time — putting a real number to what we are trying to achieve,” Hockey told a news conference. “We want to add over $2 trillion more in economic activity and tens of millions of new jobs.”

And to think all it took was several dozen of politicians sitting down for 2 days in balny Syndey and agreeing. So over five years after the start of the second great depression the G-20 has finally agreed and decided it is time to grow the economy: supposedly the reason there was no such growth previously is because the G-20 never willed it…

There is only one problem: the G-20 has absolutely no idea how to actually achieve its goal of boosting global output by more than the world’s eighth largest economy Russia produces in a year. Nor does it have any measures to prod and punish any laggards from this most grand of central planning schemes.

There was no road map on how nations intend to get there or repercussions if they never arrive. The aim was to come up with the goal now, then have each country develop an action plan and a growth strategy for delivery at a November summit of G20 leaders in Brisbane.

“Each country will bring its own plan for economic growth,” said Hockey. “Each country has to do the heavy lifting.”

Agreeing on any goal is a step forward for the group that has failed in the past to agree on fiscal and current account targets. And it was a sea change from recent meetings where the debate was still on where their focus should lie: on growth or budget austerity.

So who is the mastermind behind this grand plan? Why the IMF of course: “The growth plan borrows wholesale from an IMF paper prepared for the Sydney meeting, which estimated that structural reforms would raise world economic output by about 0.5 percent per year over the next five years, boosting global output by $2.25 trillion.”

The same IMF whose “forecasts” can best be summarized in the following chart (which will be revised lower shortly to account for all the snow in the Northeast US): 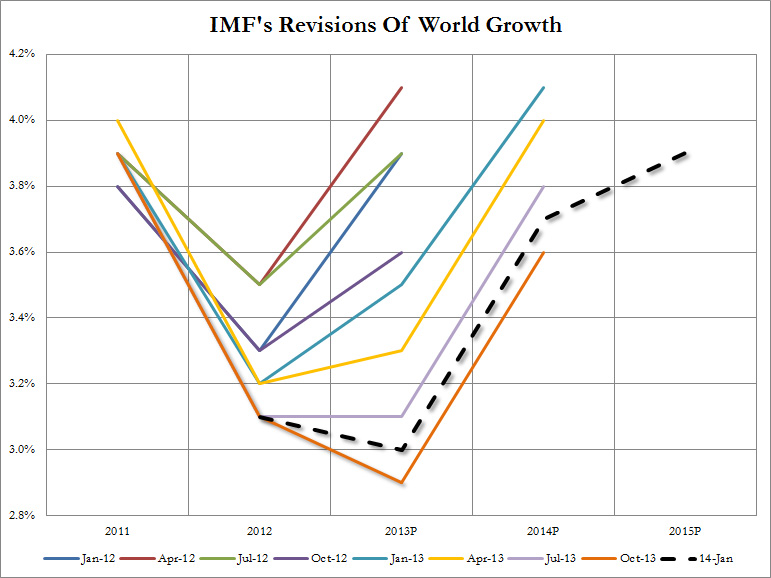 Aside from this idiocy, the other topic under boondoggle discussion was the fate of the taper, and specifically how emerging markets will (continue to) suffer should the Fed continue to withdraw liquidity. Here, once again, the developed nations won out, leaving the EMs, and particularly India’s Raghuram Rajan – who has been pleading for far more coordination between central banks in a time of globla tightening – high and dry.

What inflation? As for coordination, here is what the G-20 did agree on: whatever Yellen says, goes:

Financial markets had been wary of the possibility of friction between advanced and emerging economies, but nothing suggested the meeting would cause ripples on Monday. “The text of the communiqué indicates that the standard U.S. line that what is good for the core of the world economy is good for all seems to have won out,” said Huw McKay, a senior economist at Westpac, noting there was nothing that could be taken as “inflammatory” about recent volatility in markets.

There was a nod to concerns by emerging nations that the Federal Reserve consider the impact of its policy tapering, which has led to bouts of capital flight from some of the more vulnerable markets.

“All our central banks maintain their commitment that monetary policy settings will continue to be carefully calibrated and clearly communicated, in the context of ongoing exchange of information and being mindful of impacts on the global economy,” the communiqué read. There was never much expectation the Fed would consider actually slowing the pace of tapering, but its emerging peers had at least hoped for more cooperation on policy.

Hockey said there had been honest discussions among members on the impact of tapering and that newly installed Fed Chair Janet Yellen was “hugely impressive” when dealing with them.

Indeed, in the three weeks that Yellen has been Chairmanwoman, she has been truly hugely impressive. It’s the next three years that may be more problematic.

1 thought on “G-20 Agrees To Grow Global Economy By $2 Trillion, Has No Idea How To Actually Achieve It”