Several hours ago, and a day after the latest truce lasted about a few minutes before the the shooting returned and resulted in the bloodiest day of Ukraine’s protests so far, there was hope that the situation in Ukraine may finally be getting resolved, when Ukraine’s President Viktor Yanukovich announced plans for early elections in a series of concessions to his pro-European opponents. As Reuters reported earlier, Russian-backed Yanukovich, under pressure to quit from mass demonstrations in central Kiev, promised a national unity government and constitutional change to reduce his powers, as well as the presidential polls. He made the announcement in a statement on the presidential website without waiting for a signed agreement with opposition leaders after at least 77 people were killed in the worst violence since Ukraine became independent 22 years ago. This comes in the aftermath of S&P’s announcement overnight that the Ukraine will default in absence of favorable changes.

So is this the favorable change that everyone has been expecting. Nope.

First, it was Russia’s turn to remind everyone that it is Russia’s decision whether or not it will allow the nations that has the bulk of its European gas pipelines crossing its territory to leave its sphere of influence. To wit, Russia announced that it plans to wait before issuing additional financial support to Ukraine’s govt under $15b package, FinMin Anton Siluanov says in interview in Hong Kong, adding that Ukraine’s central bank may be wasting intl reserves defending hryvnia. Almos as if Russia would like the Ukraine to become insolvent and thus even more dependent on its good graces.

And then it was Europe’s turn. As WSJ reported, Polish Prime Minister Donald Tusk told reporters that “A lack of credibility will hang over all negotiations with Yanukovych’s participation. It seems the atmosphere in Kiev, especially after the death of so many people, may prompt the people in the Maidan to say: ‘We won’t discuss anything anymore with Yanukovych’.… The situation is changing so dramatically that this [deal] doesn’t necessarily need to be accepted by the Maidan, which considering thousands of people there make it the main reference point in Ukraine. … It’s too early for optimistic conclusions.”

He also said Poland’s efforts in Ukraine are an “investment in our security.” “It seems an increasing number of Poles understand that for a secure Poland an independent Ukraine is needed,” he said.

“It would be naive to assume Yanukovych has any good will—there’s nothing behind him but the wall. I don’t know anyone in the world who could say he trusts President Yanukovych. …

“I understand people in the Maidan who say ‘We don’t trust this man’ and that his departure is a condition for this deal. Those people need to be understood—bodies of people killed the other night are still there.

“But in order not to jeopardize this effort, in spite of myself I’m saying: ‘President Yanukovych should be at the table.’”

It was unclear as of this moment whether Yanukovich was at the table but what is clear is the following:

Did they take him out?

And some more details from Dow Jones:

In other words, no deal, as the confusion and escalation will go on, until either a CIA-installed, pro-Western puppet government is installed (with the aid of said West of course – see Victoria Nuland leaked phone conversation), or until the Ukraine taps out and demands unconditional help from Putin.

At this point there does not appear to be a middle ground. 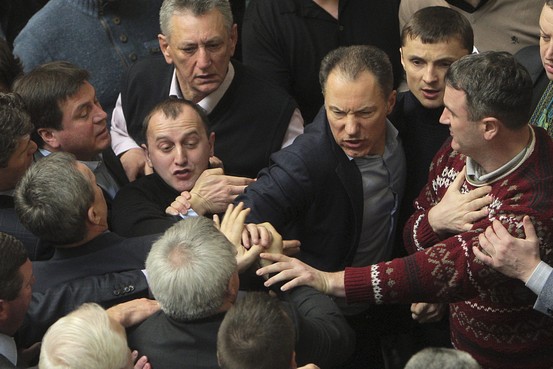 Ukrainian lawmakers scuffle in the country’s Parliament after the speaker
delayed debate on a resolution to reduce the powers of President Viktor
Yanukovych. – Reuters