– Russian Study: Fukushima released 100 quadrillion becquerels of cesium into atmosphere… In just ONE day — About equal to Chernobyl’s total release 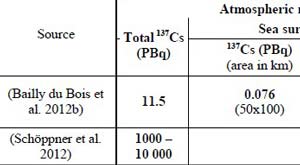 Michael Schöppner, University of Roma Tre, Doctoral School of Mathematics and Physics (pdf), 2012: […] using the Fukushima nuclear accident as an example it is demonstrated that it is possible to reconstruct a source term of known location. […] This is done exemplary on the basis of the 2011 Fukushima nuclear accident. […] Due to the radioactive and unstable environment on-site of the NPP no reliable assessment of the emissions could have been done. […] Fukushima source term can be approximated by usage of ATM [atmospheric transport modelling]. […] although the reconstructed source suggests higher emissions than presented in other publications, the derived time dependent characteristics are in reasonable agreement. […] the comparison shows similar features in the source terms from various isotopes and stations. […] the problem of source term reconstruction has been reduced to a system of linear equations. 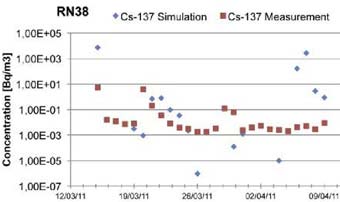 Journal of Environmental Radioactivity, Michael Schöppner, et al., December 2012 (emphasis added):  […] the real source-term at the FD-NPP emitted fewer particles in the case of 137Cs than assumed in the worst case scenario. Based on these results a source term of 10^17 – 10^18 Bq/day [100 PBq/day – 1,000 PBq/day] seems reasonable. For 131I, however, these first results suggest a source term not too different from the worst case scenario of 10^19 Bq/day [10,000 PBq/day]. […] The fact that the two remote stations, RN79 [Hawaii] and RN70 [Sacramento, CA], suggest a lower source term than the worst case estimation, where the closest station, RN38 [Takasaki, Japan], does not [… This may indicate] unaccounted regional meteorological conditions. […] The presented simulations with improved settings, i.e. dry and wet deposition, resulted in a better estimation of the source-term than previously reported (Plastino et al., 2011). The scenario assuming a worst case situation suggests generally higher source-terms, which are in reasonable agreement with the reported values (IAEA, 2011). For 137Cs emissions of 10^17 – 10^18 Bq/day [100 PBq/day – 1,000 PBq/day] seem to be reasonable, while for 131I even continuous emissions of 10^19 Bq/day [10,000 PBq/day] could be possible.

The authors highly acknowledge the support by the National Scientific Committee Technology of INFN for the ERMES project, and the European Commission under the FP7 programme for the EUMEDGRID project (Grant RI-246589). […] PPP acknowledges a support provided by the EU Research and Development Operational Programme funded by the ERDF

>> Free access to the complete study is now available here

Nuclear Energy Agency: 2002 Update of Chernobyl: Ten Years On — “The total 137Cs release was estimated to be 70 petabecquerels (PBq)”