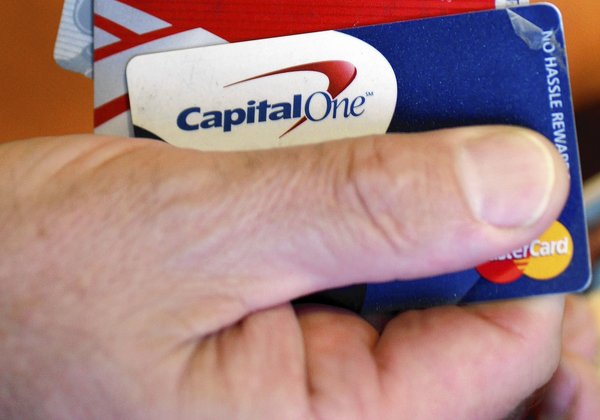 Credit card issuer Capital One isn’t shy about getting into customers’ faces. The company recently sent a contract update to cardholders that makes clear it can drop by any time it pleases.

The update specifies that “we may contact you in any manner we choose” and that such contacts can include calls, emails, texts, faxes or a “personal visit.”

As if that weren’t creepy enough, Cap One says these visits can be “at your home and at your place of employment.”

The police need a court order to pull off something like that. But Cap One says it has the right to get up close and personal anytime, anywhere.

Rick Rofman, 71, of Van Nuys received the contract update the other day. He was spooked by the visitation rights Cap One was claiming for itself.

“Even the Internal Revenue Service cannot visit you at home without an arrest warrant,” Rofman observed.

Indeed, you’d think the 4th Amendment of the Constitution, which guards against unreasonable searches and seizures, would make this sort of thing verboten.

“It sounds really invasive, but I don’t think it’s a violation of your 4th Amendment rights,” said Daniel E. Kann, a Santa Clarita lawyer who specializes in illegal-search cases.

He explained that the amendment applies primarily to searches and seizures by law enforcement, not civilians. A credit card company, in theory, could reserve the right to visit your home or office without a court order, Kann said.

But he emphasized that there are laws against harassment, not to mention stalking, and Cap One could be held accountable under such statutes if, say, it took to inviting itself over for dinner or hanging around your cubicle.

“We may modify or suppress caller ID and similar services and identify ourselves on these services in any manner we choose.”

Now that’s just freaky. Cap One is saying it can trick you into picking up the phone by using what looks like a local number or masquerading as something it’s not, such as Save the Puppies or a similarly friendly-seeming bogus organization.

This is known as spoofing, and it’s perfectly legal. As I’ve written before, the federal Truth in Caller ID Act makes it a crime to use a phony number or caller ID message to commit fraud or cause harm to others.

But it’s not against the law to engage in what courts have called “non-harmful spoofing,” which includes businesses wearing digital disguises to penetrate a consumer’s phone defenses.

Such corporate spoofing is employed primarily by telemarketers. It’s weird, to say the least, for this practice to be so publicly adopted by a major credit card issuer.

“Now more than ever, consumers need to be able to trust companies,” she said.

So what does Cap One have to say?

“Capital One does not visit our cardholders, nor do we send debt collectors to their homes or work,” Girardo said.

The exception to that, she said, is when it comes to big-ticket sporting goods. Cap One has partnerships with makers of gear like Jet Skis and Snowmobiles.

“As a last resort, we may go to a customer’s home after appropriate notification if it becomes necessary to repossess the sports vehicle,” Girardo said.

So Cap One is saying it’s more “Repo Man” than “Fatal Attraction.”

I asked Girardo about the spoofing. What’s up with that?

“Actually, we want our calls to display as Capital One on caller ID, and that’s the way they are programmed,” she replied. “However, some local phone exchanges may display our number differently. This is beyond our control, and we want our cardholders to be aware of that potential occurrence.”

That’s not what the contract update says, though. It says, ominously, that Cap One can “modify or suppress” people’s caller ID capabilities and identify itself “in any manner we choose.”

But let’s give Cap One the benefit of the doubt. Let’s accept that the company isn’t as menacing as it sounds.

That raises the question of why Cap One is sending out this bizarre contract language in the first place rather than explaining in plain English, as Girardo did, what its true intentions are.

Girardo said only that Cap One is “reviewing this language.” I take this as an indication that, now that a little sunlight has been applied, the company is not as comfortable as it previously was with behaving like a total psycho.

In the meantime, cardholders can make up their own minds. Do they want to believe the non-binding explanations of a company representative or the legally enforceable language that’s currently in their written contracts?

And while they’re pondering that, they may want to watch out for bunnies boiling on the stove.

1 thought on “Capital One Now Makes House-Calls Says It Can Show Up At Cardholders’ Homes, Workplaces”