– Gov’t Test: Cattle feed at California dairy farm had 300 pCi/kg of radioactive cesium after Fukushima; 9-month gap between when sample harvested and when received by lab — New UC Berkeley study reveals over 3,500 pCi/kg of cesium deposited on nearby roadside (ENENews, Feb 16, 2014):

Measurements of Fission Products from the Fukushima Daiichi Incident in San Francisco Bay Area Air Filters, Automobile Filters, Rainwater, and Food, Dec. 27, 2013: A variety of environmental media were analyzed for fallout radionuclides resulting from the Fukushima nuclear accident by the Low Background Facility (LBF) at the Lawrence Berkeley National Laboratory (LBNL) in Berkeley, CA. […] An asphalt berm (curb) along the downslope edge of the road protects the slopes below from rainfall runoff from the road surface. […] Typically, the sieved material represents at least 80% of the total collected material. For analysis, these sediments are packed into one of the same counting containers as are used for soil samples. These procedures were followed for the samples listed in Table A.5. 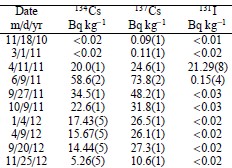 Cesium-134 levels would be even higher than reported due to the 9 months of radioactive decay that took place before testing occurred (37.5% into its 2-year half-life).

No reason is stated for the 9-month gap between when  the vegetation sample was harvested and when it was tested.