The clean debt ceiling bill has just passed the House where it got the required majority in a 221 to 201 final vote, with just 28 Republicans voting Yea (and 199 voting Nay) – a vote that has made history with the fewest number of votes from a majority on a bill that passed the House since 1991. It also means means that with a Senate passage assured, the US can now spend away until March 15, 2015. The final breakdown:

And one for the history books: 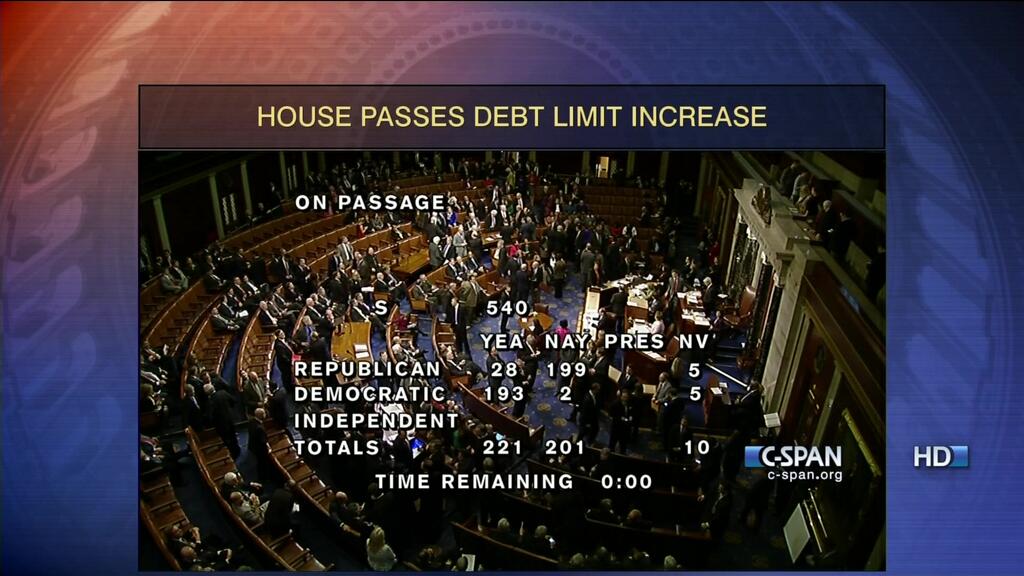 Considering that the vast majority of Republicans voted against John Boehner’s latest “plan” to do the Democrats’ work for them, and pass a clean debt ceiling, perhaps it is time to look for a speaker who represents the interests of more than just a tiny fraction of the party… and the Democrats of course.

Of the 28 Republicans voting for the debt ceiling, there were only four members of GOP leadership: Speaker John A. Boehner of Ohio, Majority Leader Eric Cantor of Virginia, Majority Whip Kevin McCarthy of California, and Chief Deputy Whip Peter Roskam of Illinois. As a matter of principle, the speaker rarely votes, making this one particularly notable.

That means 15 other GOP committee chairmen voted against the measure, including Budget Chairman Paul D. Ryan of Wisconsin.

Some Republicans who fall along a more centrist point on the political spectrum — the same ones who fought for a “clean” bill to fund federal operations during the government shutdown — voted “yes” on Tuesday. They include Charlie Dent of Pennsylvania and three New Yorkers: Michael G. Grimm, Peter T. King and Richard Hanna.

The politically tricky vote for a debt ceiling was made easier for those Republicans who are retiring. Included in that group is McKeon, Frank R. Wolf of Virginia, Jon Runyan of New Jersey and Howard Coble of North Carolina.

Vulnerable Republicans were faced with a choice about how to vote Tuesday night. These Republicans aren’t vulnerable because they face tough primary challengers from the right; they’re vulnerable because they reside in districts with light Republican support. Those lawmakers facing bruising re-election bids in November who voted with Democrats are: David Valadao and Gary G. Miller of California, Frank A. LoBiondo of New Jersey, Patrick Meehan of Pennsylvania and Dave Reichert of Washington.

“I’m grateful to the speaker and the Republican leadership for giving this House this opportunity to act in a way that is consistent with the constitution,” said Minority Leader Nancy Pelosi, D-Calif., speaking in the chamber in advance of the vote. “I thank my Democratic colleagues for never wavering from this position and standing firm on behalf of all Americans.”