– Americans Are Renouncing Their Citizenship In Record Numbers (ZeroHedge, Feb 9, 2014):

Three times more Americans gave up on America in 2013 than in 2012. As The WSJ reports, last year saw a record number of US taxpayer expatriations. While “exceptionalism” and living the American Dream remain cornerstones of maintaining the US citizenry’s view of the world, it seems everything from tax-code changes to spying drove 2,999 people to hand in their passports last year, “above all, fear seems to be driving this increase.” 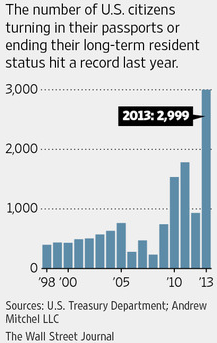 According to the Treasury Department, 630 individuals renounced their U.S. citizenship or ended their long-term U.S. residency by turning in their green cards during the fourth quarter.

The fourth-quarter figure brought to 2,999 the total number of expatriations for 2013. The previous record was 1,781 in 2011, said Andrew Mitchel, a tax lawyer in Centerbrook, Conn., who tracks the data.

attributed the surge to increased awareness of the obligation to file U.S. tax returns, the increasing burden of compliance and the fear of large penalties for failure to file U.S. returns.

“Above all, fear seems to be driving this increase in expatriations,”

The U.S. is unique among developed nations in requiring citizens and green-card holders to file tax returns, regardless of where they live, he noted. People who expatriate also can be subject to exit tax.

However, we suspect this spike in 2013 is only the beginning…

This week, Internal Revenue Service Commissioner John Koskinen told a congressional committee that since 2009 more than 43,000 U.S. taxpayers have entered a special program for taxpayers with undeclared offshore accounts and paid more than $6 billion in back taxes, interest and penalties.

Experts representing such taxpayers estimate that the IRS still is due several billion dollars more.

The Foreign Account Tax Compliance Act may also be encouraging some taxpayers to expatriate, experts said. Set to take effect this year, it requires foreign financial institutions to report account information to the U.S., both for U.S. citizens and green-card holders living in the U.S. and abroad.

4 thoughts on “Americans Are Renouncing Their Citizenship In Record Numbers”