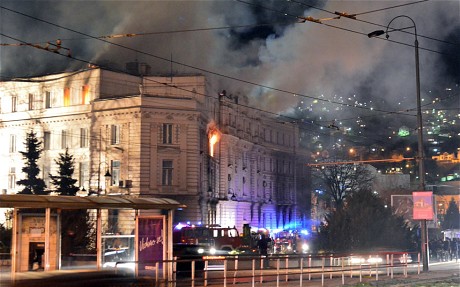 Demonstrators also clashed with riot police for a third consecutive day in the protests, which have remained largely contained to the Croat-Muslim Bosniak half of Bosnia.

Anti-government protests began on Wednesday in the northern city of Tuzla, before spreading as thousands took to the streets of a dozen cities to express their discontent over the almost 40 per cent unemployment rate.

Local media said police used rubber bullets and tear gas to disperse protesters in Sarajevo, where demonstrators stormed two government buildings including a presidential office, setting them ablaze and smashing furniture. The palace fires were promptly put out but almost all the windows were broken.

By 7pm local time, protesters had dispersed in the three main flashpoint towns, but police remained out in force. All shops were closed and streets were littered with glass and debris. On Saturday morning, the streets of Sarajevo were calm after firemen spent the night dousing the flames which almost gutted one regional government building, consuming cars and newsstands nearby.

However the city was bracing itself for further protests.

In Tuzla, the crowd stormed the local government building, throwing furniture, files and papers out of the windows and then setting the building on fire.

The protests in Tuzla may be calming following the resignation of Sead ?ausevi?, the Prime Minister of Tuzla Canton – one of 10 cantons in the Croat-Muslim Bosniak half of Bosnia – but other cities are only just getting beginning. In an unprecedented move, hundreds gathered in the capital of the Bosnian Serb part of the country, Banja Luka, to express support for protesters in the country’s other mini-state, which is shared by Bosniaks and Croats.

“We gathered to support the protests in Tuzla where people are fighting for their rights,” said Aleksandar Zolja, an activist from Banja Luka. The protests began on Wednesday with a clash between police and unpaid workers of four former state-owned companies, which left some 130 hurt, mostly from tear gas.

Said otherwise, wealth transfer, crony capitalism, corruption and an economic collapse have managed to unite the same people that just two decades ago were killing each other during the Yugoslavian civil war over such typical Eastern European lines of tension as religion and ethnicity. Congratulations.

Four companies employed most of the population of Tuzla. When they were privatised, contracts obliged the new owners to invest in them and make them profitable but they sold the assets, stopped paying workers and filed for bankruptcy.

Ironically, the very same is happening in the US and the rest of the world, as the productive assets are being confiscated, the middle class is being exterminated, and an increasingly smaller number of entities control the bulk of the wealth.

Summarizing the Bosnian situation in a nutshell:

Beside the high unemployment rate, the privatisation that followed the end of communism and the 1992-95 war produced a handful of tycoons, almost wiped out the middle class and sent the working class into poverty. Corruption is widespread and high taxes to fund a bloated public sector eat away at paychecks.

Or yet another teaser of what is coming to every other insolvent, crony capitalist, corrupt country in the world.