A cutting-edge corner of science is being wooed by Silicon Valley, to the dismay of some academics.

How much are a dozen deep-learning researchers worth? Apparently, more than $400 million.

This week, Google reportedly paid that much to acquire DeepMind Technologies, a startup based in London that had one of the biggest concentrations of researchers anywhere working on deep learning, a relatively new field of artificial intelligence research that aims to achieve tasks like recognizing faces in video or words in human speech (see “Deep Learning”).

The acquisition, aimed at adding skilled experts rather than specific products, marks an acceleration in efforts by Google, Facebook, and other Internet firms to monopolize the biggest brains in artificial intelligence research.

In an interview last month, before the DeepMind acquisition, Peter Norvig, a director of research at Google, estimated that his company already employed “less than 50 percent but certainly more than 5 percent” of the world’s leading experts in machine learning, the wider discipline of which deep learning is the cutting edge.

Companies like Google expect deep learning to help them create new types of products that can understand and learn from the images, text, and video clogging the Web. And to a significant degree, leading academic scientists have embraced Silicon Valley, where they can command teams of engineers instead of students and have access to the largest, most interesting data sets. “It’s a combination of the computing resources we have and the headcounts we can offer,” Norvig said. “At Google, if you want a copy of the Web, well, we just happen to have one sitting around.”

Yoshua Bengio, an AI researcher at the University of Montreal, estimates that there are only about 50 experts worldwide in deep learning, many of whom are still graduate students. He estimated that DeepMind employed about a dozen of them on its staff of about 50. “I think this is the main reason that Google bought DeepMind. It has one of the largest concentrations of deep learning experts,” Bengio says.

Vying with Google for talent are companies including Amazon, Microsoft, and also Facebook, which in September created its own deep learning group (see “Facebook Launches Advanced AI Effort to Find Meaning in Your Posts”). It recruited perhaps the world’s best-known deep learning scientist, Yann LeCun of New York University, to run it. His NYU colleague, Rob Fergus, also accepted a job at the social network. 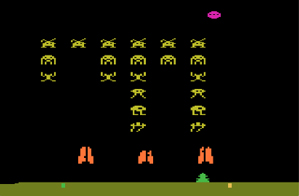 War games: Software from DeepMind learned on its own how to play Space Invaders.

As advanced machine learning transitions from a primarily scientific pursuit to one with high industrial importance, Google’s bench is probably deepest. Names it has lured from academia into full-time or part-time roles include Sebastian Thrun (who has worked on the company’s autonomous car project); Fernando Pereira, a onetime University of Pennsylvania computer scientist; Stanford’s Andrew Ng; and Singularity University boss Ray Kurzweil.

Last year, Google also grabbed renowned University of Toronto deep-learning researcher Geoff Hinton and a passel of his students when it acquired Hinton’s company, DNNresearch. Hinton now works part-time at Google. “We said to Geoff, ‘We like your stuff. Would you like to run models that are 100 times bigger than anyone else’s?’ That was attractive to him,” Norvig said.

Not everyone is happy about the arrival of the proverbial Google Bus in one of academia’s rarefied precincts. In December, during a scientific meeting in Lake Tahoe, Mark Zuckerberg, the founder and CEO of Facebook, made a surprise appearance accompanied by uniformed guards, according to Alex Rubinsteyn, a bioinformatics researcher at Mount Sinai Medical Center, who complained in a blog post that a cultural “boundary between academia and Silicon Valley” had been crossed.

“In academia, status is research merit, it’s what you know,” Rubinsteyn says. “In Silicon Valley, it’s because you run a company or are rich. And then people around those people also think about getting rich.”

Peter Lee, head of Microsoft Research, told Bloomberg Businessweek that deep learning experts were in such demand that they command the same types of seven figure salaries as some first-year NFL quarterbacks.

Some have resisted industry’s call. Of the three computer scientists considered among the originators of deep-learning—Hinton, LeCun, and Bengio—only Bengio has so far stayed put in the ivory tower. “I just didn’t think earning 10 times more will make me happier,” he says. “As an academic I can choose what to work on and consider very long-term goals.” Plus, he says, industry grants have started to flow his way as companies realize they’ll soon run out of recruits. This year, he’s planning to increase the number of graduate students he’s training from four to 15.

DeepMind was cofounded two years ago by Demis Hassibis, a 37-year-old described by The Times of London as a game designer, neuroscientist, and onetime chess prodigy. The DeepMind researchers were well known in the scientific community, attending meetings and publishing “fairly high-level” papers in machine learning, although they had not yet released a product, says Bengio.

DeepMind’s expertise is in an area called reinforcement learning, which involves getting computers to learn about the world even from very limited feedback. “Imagine if I only told you what grades you got on a test, but didn’t tell you why, or what the answers were,” says Bengio. “It’s a difficult problem to know how you could do better.”

But in December, DeepMind published a paper showing that its software could do that by learning how to play seven Atari2600 games using as inputs only the information visible on a video screen, such as the score. For three of the games, the classics Breakout, Enduro, and Pong, the computer ended up playing better than an expert human. It performed less well on Q*bert and Space Invaders, games where the best strategy is less obvious.

Such skilled computer programs could have important commercial applications, including improving search engines (see “How a Database of the World’s Knowledge Shapes Google’s Future”), and might be particularly useful in helping robots learn to navigate the human world. Google last year acquired several leading robotics companies, including the makers of various types of humanoid robots (see “Google’s Latest Robot Acquisition Is the Smartest Yet.”)

Certainly, large companies wouldn’t be spending so heavily to monopolize talent in artificial intelligence unless they believed that these computer brains will give them a powerful edge. It may sound like a movie plot, but perhaps it’s even time to wonder what the first company in possession of a true AI would do with the power that it provided.

Bengio says not to worry about that. “Industry is interested in applying machine learning, and especially deep learning, to the tasks that they want to solve,” he says. “Those [efforts] are on the way towards AI, but still far from it.”