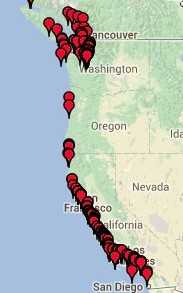 The Oregonian, Dec. 27, 2013: The wasting starfish found in Oregon were discovered in April […] Summer surveys along Oregon’s coast didn’t find any dying starfish, but they happened before the biggest outbreaks, [Pete Raimondi, chairman of UC Santa Cruz’s ecology and evolutionary biology department] said. A team of researchers is planning to survey Oregon’s coast again in late January. Raimondi said he doubts Oregon starfish will somehow be isolated from the outbreak.

Ben Miner, biology professor at Western Washington University, Jan. 30, 2014: “It certainly suggests that those ecosystems are not healthy […] To have diseases that can affect that many species, that widespread is, I think is just scary.”

Laura James, scuba diver, Jan. 30, 2014: “There were just bodies everywhere. There were just splats. It looked like somebody had taken a laser gun and just zapped them and they just vaporized. […] People always ask me, ‘Do you see any big difference between now and when you started? […] I’ve seen some subtle differences, but this is the change of my lifetime. We’ve had small occasional die-offs here and there — It’s not like this, a mass mortality event. ”

Ian Hewson, Cornell microbial biologist, Jan. 30, 2014: “It’s like the matrix […] We have to be very careful that we’re not identifying something that’s associated with the disease but not the cause.”

KION, Jan. 8, 2014: I asked about the starfish disease and the dead sea life off our coast. [Dan Hirsch, University of California Santa Cruz] says it’s possible fallout could be involved but unless you do the science and find Fukushima radioactive elements, don’t make conclusions.

2 thoughts on “West Coast Sea Stars Melt Into Mush, ‘Just Vaporized … It’s The Change Of My Lifetime’ – ‘Ripping Themselves Apart … Innards Spilled Out’”