– U.S. Military: Baby wipes and tape used to clean up Fukushima radioactive material — Soldiers working with contamination not given protective gear because “we don’t want to alarm public” (ENENews, Jan 23, 2014): 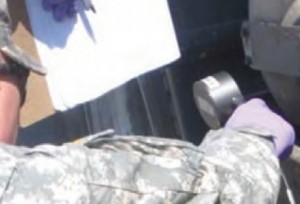 The TTP [tactics, techniques, and procedures] for decontamination, as well as the level of personal protective equipment (PPE), was based upon an effort not to alarm the civilian population. Another example of an attempt to not alarm local civilians occurred on the airfield where Soldiers were monitoring aircraft for radiation exposure. On one occasion, a pilot asked, “If we’re supposedly contaminated with radiation, why are you guys out here with just a pair of latex gloves?” One of the Airmen working with the Soldiers replied, “You guys have civilians on the aircraft with you also, and we don’t want to alarm the civilians.”

Lindsay Cooper, 34, USS Ronald Reagan flight deck crew for 3/11 rescue mission, Jan. 18, 2014: “The whole ship was in that hangar bay. It was scary. The navy had no idea what was going on. They didn’t know how to handle it. I can’t blame them. Had they known the truth I don’t think we would have been in that area.”

See also: Video: Navy sailors use no masks when scrubbing radioactive particles on USS Ronald Reagan after 3/11 — CNN: “The idea here is all about safety”

4 thoughts on “U.S. Military: Baby wipes and tape used to clean up Fukushima radioactive material — Soldiers working with contamination not given protective gear because “we don’t want to alarm public””