Despite Erdogan’s paranoia over “an interest rate” lobby or blaming the Lira’s collapse on the Fed, as Gavekal’s Nick Andrews notes, Turkey is showing no signs of stabilization. As the sell-side scrambles to explain how this is all priced in and “contained,” it is very apparent from the following chart just how vulnerable to contagion the world is if Turkey defaults. The country’s liabilities have multipled dramatically in recent years with over $350 billion of foreign bank exposure to Turkey on an ultimate risk basis.

Fragile and Complacent… (and in denial)

Gavekal notes – Turkey is not, however, showing any signs of stabilization. The lira continues to fall, and policymakers are doing little to contain the situation.

With soaring inflation, a plunging currency and a run for the exits, one would think Turkey would do what other emerging markets did during last year’s taper tantrum, and hike rates.

Instead the new economy minister said recently that this is not necessary, since the country is in tip-top shape. “We couldn’t create an economic crisis in Turkey even if we wanted to, it’s that strong,” said the minister, whose predecessor was purged in the recent corruption scandal.

Turkey has some uniquely bad problems…

Not only is its current account deficit at nearly 8% of GDP – the highest in the MSCI’s emerging markets universe—but the country is also geographically closer and thus more dependent on the eurozone, whose economic recovery is painfully slow. Its political situation is also clearly very unstable.

Still, as the chart below shows, the country’s liabilities have multiplied in recent years – adding to global contagion pressures if Turkey defaults.

Indeed, already fragile Greece is particularly exposed to the Eurasian republic. Turkish credit as a proportion of total Greek bank assets stands at over 5%, compared to 0.7% for the next two largest (Dutch and UK banks). 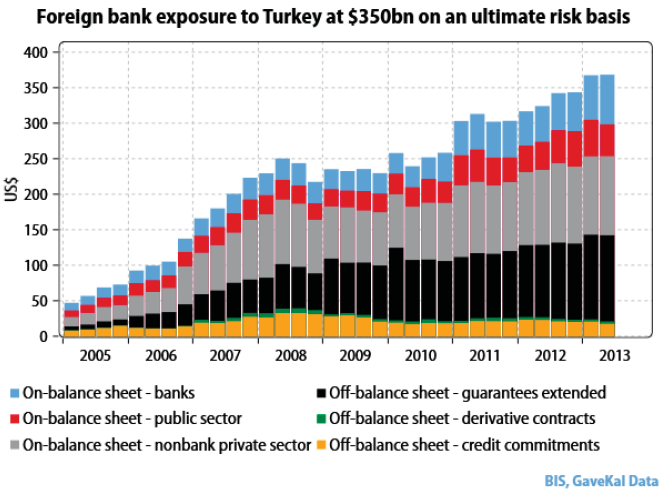 As Gavekal notes though – Europe’s exposure would likely be mitigated by the European Central Bank with their now standard response of pumping excess liquidity into the euro system to ensure no bank runs out of cash. This might explain why the peripheral eurozone countries are not suffering more fallout from Greece’s exposure to Turkey.

However, with the new template in place, depositors in Europe’s banks exposed to Turkey may well prefer to pull their cash than trust their will be no haircuts for ECB aid…