Lou Dobbs, host: Your thoughts on nuclear power and why you think that’s so critical, given the direction of our climate? 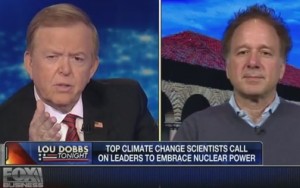 Ken Caldeira, climate scientist in the Carnegie Institution Department of Global Ecology at Stanford University: […] If we look at nuclear power, the facts about the objective risks are also fairly well established, in that nuclear power seems far less risky than coal. And yes, there are risks — we’ve seen Fukushima, and we know that there’s waste disposal issues — but there’s nothing fundamental about nuclear power that says that it can’t be substantially safer than what we’re currently doing.

Dobbs: I don’t want to get into the issue nuclear power itself, other than to say Fukushima — as you put it aside here — I mean, we don’t even know the true extent of that disaster and its impact. You would agree with that right?

Caldeira: I would agree with that. I think Fukushima shows us that the current generation and our current way of operating nuclear power plants is dangerous, but we don’t throw the baby out with the bathwater just because something is error-prone today doesn’t mean we can’t make it better.

Note that both Carnegie Endowment and Stanford University are included in a Tepco document that shows a small group of U.S. entities “working together” with Tepco to “disseminate” Fukushima-related information.