– Ex-Cops Acquitted In Beating Death Of Homeless Man In California 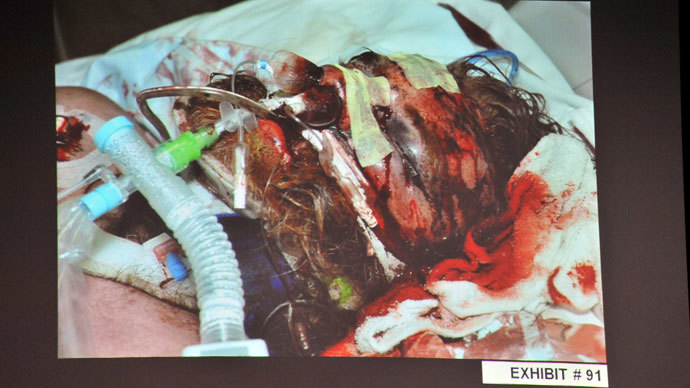 An evidence photo of beating victim Kelly Thomas in hospital, as it was shown during a preliminary hearing on his death, for Fullerton police officers Manuel Ramos and Jay Cicinelli at the Orange County Superior Court in Santa Ana, California May 7, 2012.(Reuters/Joshua Sudock)

The two police officers acquitted of violently killing a homeless man in California still might face federal charges as the FBI prepares to reexamine the case.

Testimony and evidence entered during the trial surrounding the death of a schizophrenic homeless man from California will be examined by the Federal Bureau of Investigation, an FBI spokesperson said Monday.

A representative for the FBI field office in Los Angeles told the LA Times on Monday evening that the United States Department of Justice will review the contents of the case before determining if federal charges should be filed against the two former Fullerton, CA police officers acquitted earlier that night of killing the man, Kelly Thomas, in 2011.

Late Monday, a jury found Manuel Ramos and Jay Cicinelli not guilty of second-degree murder and involuntary manslaughter, respectively, after only a few hours of deliberating.

The two officers were accused of killing Thomas two-and-a-half years ago after confronting him at a metro stop in Fullerton on July 5, 2011. Thomas was suspected of possessing stolen goods, and a minor altercation between him and the police quickly escalated to a terrifying brawl that ended with the mentally disabled man being sent to the hospital clinging to his life.

“Thomas was tackled, hit with a baton, pinned to the ground, punched repeatedly in the ribs, kneed in the head, Tasered four times and then struck in the face with the Taser device eight times,” the Times described the incident when charges were first filed against the officer. He died five days later of injuries sustained at the hands of the police, and disturbingly graphic audio and video footage recorded as he pleaded for his life helped propel the case to the national spotlight.

Later that month, the FBI commenced an investigation into the facts and circumstances surrounding the death of Thomas and weighed filing federal charges against the Fullerton cops. Now with the completion of the state trial, the FBI says information brought to light during that case will be considered as investigators mull over the merits once again of pursuing federal charges.

“With the conclusion of the state court trial, investigators will examine the evidence and testimony to determine whether further investigation is warranted at the federal level,” FBI spokeswoman Laura Eimiller in Los Angeles said in a statement offered to the Times late Monday.

Ron Thomas, father of the deceased, told reporters immediately after the verdict was read that he hoped the Justice Department would consider filing federal charges.

According to the Orange County Register, Mr. Thomas stood up in court after the not guilty verdicts were read by the clerk and asked, “What’s wrong with these people?”

“It’s carte blanche for police officers everywhere to beat us, kill us” because the verdict proves “they’ll get away with it,” Mr. Thomas said during a press conference late Monday.

“I’ve never seen something so bad happen to a human being, and have it done by on-duty police officers,” he told the Times. “And they can walk away scot-free.”

On Monday evening, National Coalition for the Homeless advisor Brian Levin wrote that the Fullerton police could be charged by federal officials under 18 USC 242, or the Deprivation of Civil Rights Under Color of Law.

“First intended to protect newly freed slaves from abuses at the hands of local southern sheriffs,” Levin wrote, “the law has been used against prison guards, a judge who sexually assaulted women and some of the officers involved in the beating of Rodney King,”

“If a federal criminal trial takes place the jury pool could encompass several California counties that make up the Central District of California,” Levin added.

A third Fullerton cop was expected to be tried later this month, but District Attorney Tony Rackauckas said after Monday’s verdicts that former officer Joseph Wolfe would likely be sparred a trial.

“I don’t intend to proceed with another trial when there’s an acquittal on these officers,” Rackauckas said.