– Welcome To The Blackstone Recovery: Over 11 Million Americans Spend More Than Half Their Income On Rent (ZeroHedge, Jan 13, 2014):

As we wrote most recently in November, the median asking rent in the US just rose to an all time high… 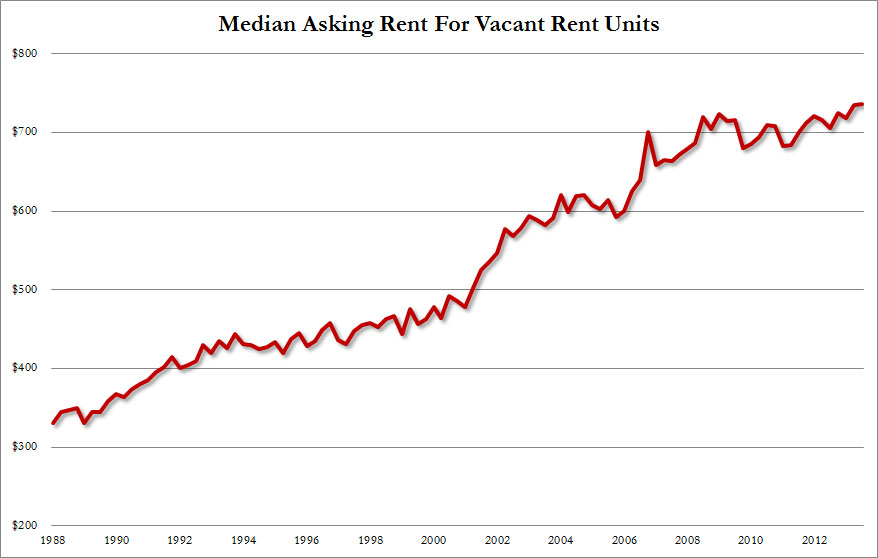 … explained by the lowest US homeownership rate in nearly 20 years. 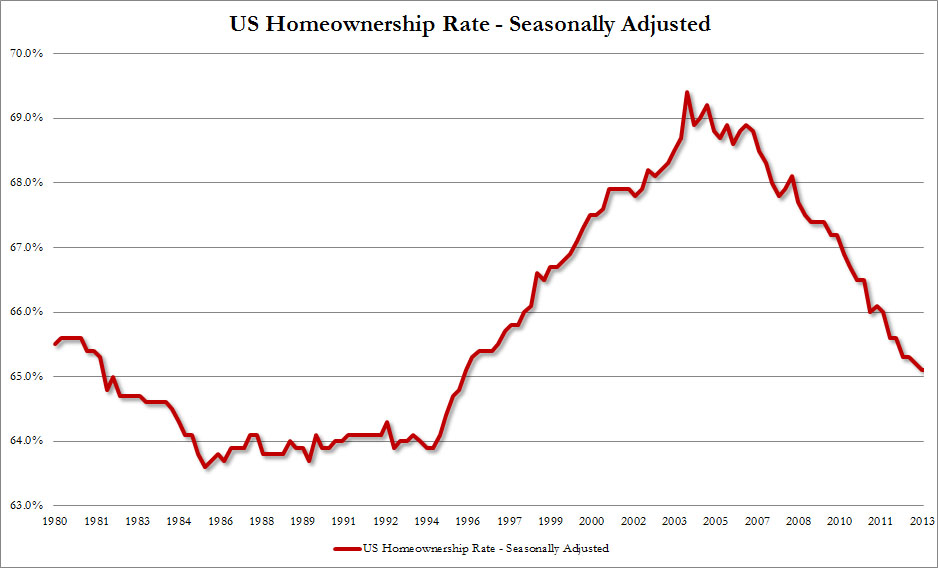 And while the charts above mean another year of record bonuses for America’s largest landlord, Wall Street-based Blackstone, they also mean something else for millions of ordinary Americans: a choice, which as Bloomberg summarizes, “We either eat, or we pay rent.”

Indeed, in the new normal, the recovery means an ordinary American worker either has a roof above their head, or food on the plate. The two increasingly are exclusive.

No, that’s not a joke: here are the facts – an estimated 11.3 million Americans were spending more than half their income on rent in 2011, according to the Harvard analysis based on latest available Census data. That number represented a 28 percent increase from 2007.

But… but … how is this possible? After all, the recovery, right?  Wrong.

Stagnant incomes and increased demand for cheap apartments spurred the rise. Between 2007 and 2012, real median renter incomes fell by 7.6 percent, based on Census data compiled by the Joint Center. The number of renters climbed 11 percent between 2007 and 2011, U.S. Department of Housing and Urban Development data show. A Census report released this month found that 31.6 percent of Americans lived in poverty for at least two months between 2009 and 2011, an increase from 27.1 percent over the 2005 to 2007 period.

And the nail in the coffin: the annual rate of change in real disposable income per capita just went negative. 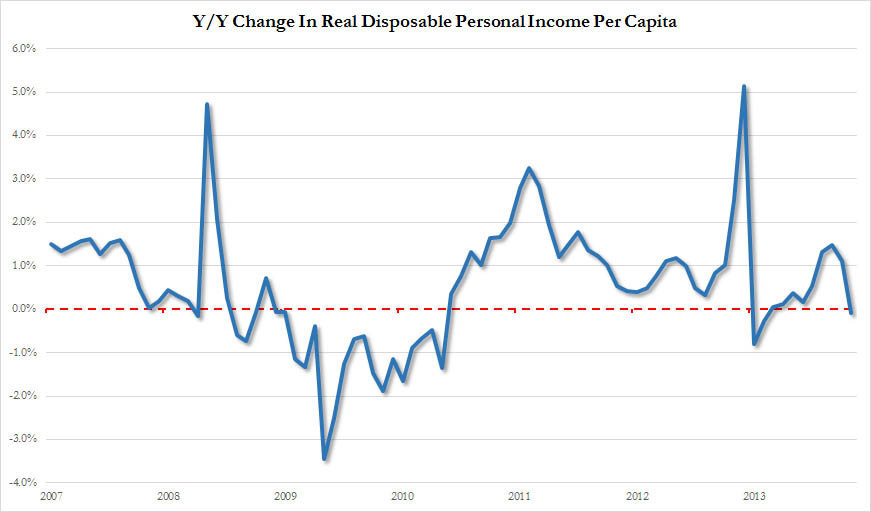 The rest of the story is well-known. Wall Street landlords, who have access to cheap funding, demand a high cap rate, and as a result rents keep going higher and higher, and since the cost of capital is still sufficiently low to where even a less than fully rented out complex will generate a positive return, there is no impetus to lower prices in order to generate more demand (well, everywhere except perhaps in New York of all places, where rents continue to decline). Alas, for others this dynamics means being forced to move out (and not being able to squat in a house in which the mortgage has not been paid for years). Such as Hector Pinedra:

Hector Pineda spends 60 percent of his income renting a $1,500-a-month apartment for his family in Alexandria, Virginia. With housing around him slated to be torn down and replaced by pricier units, the 33-year-old cook worries his rent will go up or his building too will be demolished.

In the neighborhood where Pineda lives with his wife and their two sons, redevelopment will claim many of the area’s 2,500 affordable housing units, starting as early as this year, said Derek Hyra, an associate professor of Urban Affairs and Planning at Virginia Tech and a member of the Alexandria Planning Commission.

While the city and developers have pledged to provide 800 affordable apartments, Pineda says he expects many of his neighbors will have to move to find lower rents.

Hector is just one of millions of Americans who are in the same boat. And what makes it worse is that any potentially affordable housing will soon blow up, literally.

The cheapest housing units across the nation are the most likely to be demolished, and new construction typically commands higher rents, according to an analysis by the Harvard Joint Center for Housing Studies. Meanwhile, foreclosures that soared after the housing bubble burst in 2007 turned thousands of former homeowners into renters, heating up competition for affordable units.

And when there is an entire group of people – read potential voters – that is increasingly angry due to the capital misallocation courtesy of the Fed, what happens? Why the government gets involved of course.

The number of households who were potentially eligible for housing assistance ballooned to 19.3 million in 2011 from 15.9 million in 2007. Meanwhile, the number of very low-income renters receiving support barely climbed, to 4.6 million from 4.4 million, the Joint Center analysis found.

Programs including the Section 8 housing choice voucher program didn’t expand in line with rising demand during the recession. The vouchers are the federal government’s main program for helping very low-income families, seniors and the disabled afford private housing and are administered by local agencies. By subsidizing rents, they can reduce payments to 30 percent of earned income.

Unfortunately, when the government gets involved, it always gets worse. And get involved even more it will. Guaranteed:

But since the government’s incursion will merely accelerate the unaffordability of prevailing housing prices, this means that America is set for the first wave of reverse migrations, away from the coastal megapolises and into the heartland, in decades: “Without a clear fix, people and businesses may leave the most expensive rental markets — such as San Francisco, where rent appreciated 10.6 percent year-on-year in December 2013, according to data from real estate researcher Trulia Inc., based in San Francisco. They may move to places where workers can afford to live, said Mark Calabria, director of financial regulation studies at the Washington-based Cato Institute.”

That, or they may just opt out for the kind of “affordable” housing they can still get Uncle Sam’s loans to fund: cars.

And so, the New Normal recovery will truly be televised: from the “bedroom” on the rear seat of your government loan-purchased Chevy Tahoe.