So much for the recovery. Moments ago December nonfarms were revealed at just 74,000 a huge miss to expectations of 197,000 – the biggest miss Since December 2009. The drop from last month’s revised 226K was the largest since December 2010. Other notables: the change in private payrolls was a tiny 87K vs expectations of 200K. Mfg payrolls added just 9K vs 15K expected and down from 31K. Average hourly earnings for all employees rose 0.1% vs. Expected 0.2%. The good news: the unemployment rate plunged to 6.7% from 7.0%… For all the wrong reasons – the number of people not in the labor force rose to a record 91,808,000. As a reason for the plunge the BLS says there was a major weather effect seen on the forced part-time series, and notes the decline in healthcare which is rare and part of the sector slowing. Thank you Obamacare. And now bring on the Untaper. 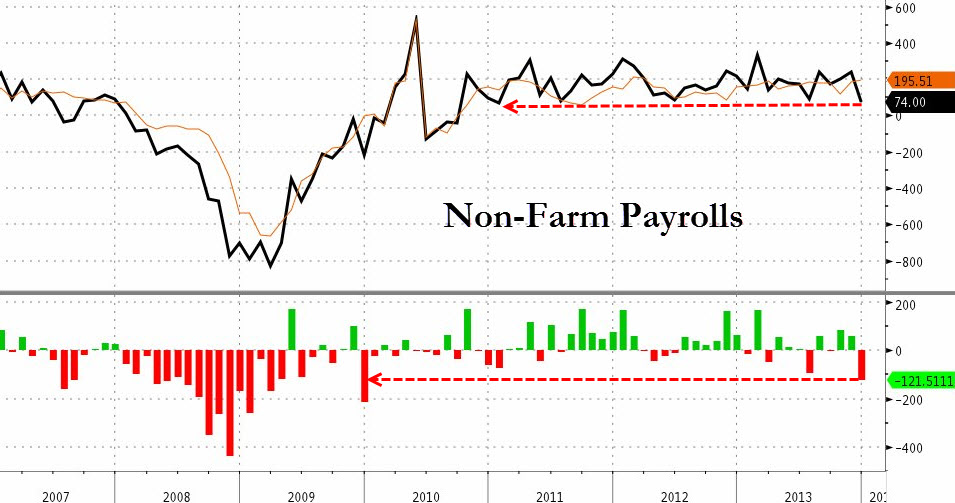 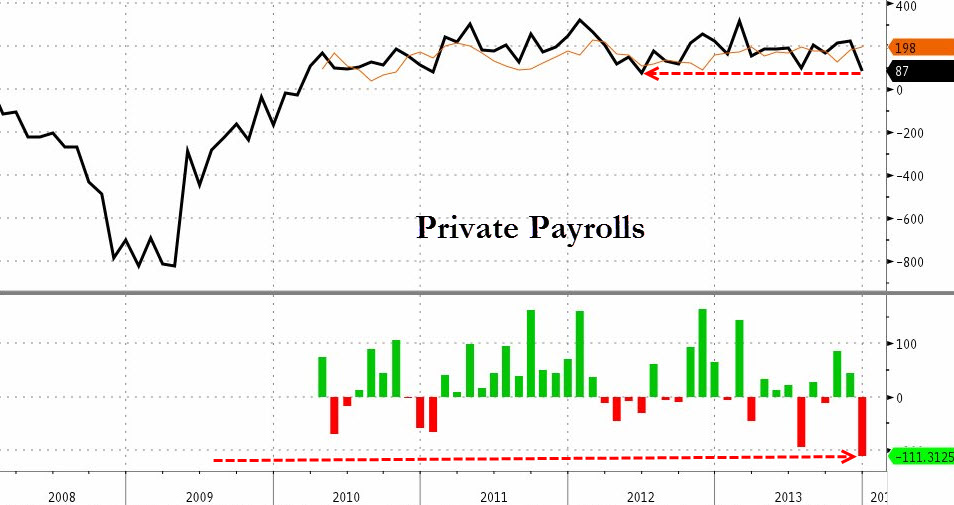 Some of the highlights from the report:

The number of persons employed part time for economic reasons (sometimes referred to as involuntary part-time workers) was essentially unchanged at 7.8 million in December. These individuals were working part time because their hours had been cut back or because they were unable to find full-time work. (See table A-8.)

In December, 2.4 million persons were marginally attached to the labor force, little changed from a year earlier. (The data are not seasonally adjusted.) These individuals were not in the labor force, wanted and were available for work, and had looked for a job sometime in the prior 12 months. They were not counted as unemployed because they had not searched for work in the 4 weeks preceding the survey. (See table A-16.)

Among the marginally attached, there were 917,000 discouraged workers in December, down by 151,000 from a year earlier. Discouraged workers are persons not currently looking for work because they believe no jobs are available for them. The remaining 1.5 million persons marginally attached to the labor force in December had not searched for work for reasons such as school attendance or family responsibilities. (See table A-16.)

And the funniest part when one considers the surge in construction workers in the ADP report:

Construction employment edged down in December (-16,000).  However, in 2013, the industry added an average of 10,000 jobs per month. Employment in nonresidential specialty trade contractors declined by 13,000 in December, possibly reflecting unusually cold weather in parts of the country.

So construction workers both surged and plunged due to the weather.