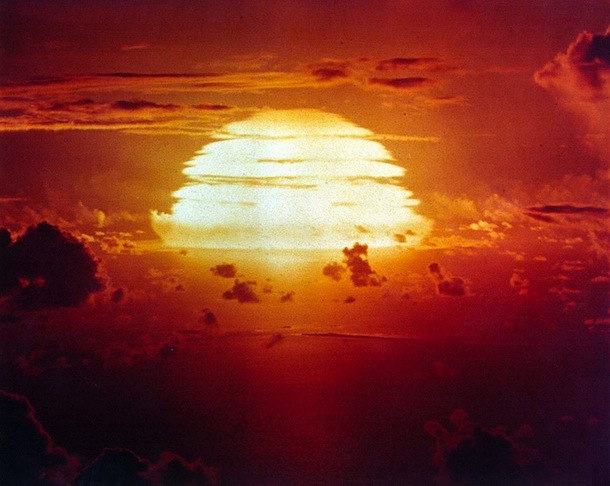 Nuclear tests, such as Operation Redwing in 1956, deposited radioactive plutonium and cesium in the atmosphere. Photo via National Nuclear Security Administration/Wikimedia

– Plutonium From Nuclear Tests Lingers in the Atmosphere (The Smithsonian, Jan 7, 2013):

Particles of radioactive plutonium from nuclear testing have remained high in the stratosphere for more than 50 years, and volcanic eruptions such as Iceland’s Eyjafjallajökull in 2010 can bring those particles into the lower atmosphere, researchers report January 7 in Nature Communications. They caution, however, that the concentrations of particles in the lower atmosphere are small and do not threaten human health.

Between 1945 and 1998, nations around the world tested nuclear weapons underground, underwater and high in the atmosphere. The atmospheric tests, conducted in the 1950s, 1960s and 1970s—along with the burn-up of a plutonium-powered SNAP-9A satellite in 1964—created radioactive debris that became attached to particles in the air, called aerosols. In the troposphere—the lowest part of the atmosphere extending from the ground to about 17 to 20 kilometers up—these particles washed out within weeks to months. But a combination of factors, such as the barrier-like tropopause, keep the particles in the stratosphere (the next layer up, extending to about 50 kilometers) for longer. But how long?

Studies done in the 1960s and 1970s, in which aerosols were sampled with aircraft and balloons, showed that most radioactive particles lingered in the stratosphere for about one to four years. Larger particles, those in the range of one to 10 micrometers settled even faster, last only weeks to months in the stratosphere. (The particles didn’t just disappear; they moved down into the troposphere during interruptions in the tropopause that allow mixing between the troposphere and stratosphere, events that happen most often in spring.) Because nuclear tests were conducted so long ago, all these radioactive stratospheric particles should mostly be gone by now, scientists had concluded.

The 2010 eruption of Eyjafjallajökull started scientists to think that those conclusions might be wrong. When the volcano erupted, researchers in Switzerland began taking aerosol samples from the troposphere, and they found elevated concentrations of radioactive particles. Levels of plutonium and cesium (another byproduct of nuclear testing) were up to three orders of magnitude higher than levels found in aerosols at ground level. These measurements contradicted the earlier aerosol studies, which had found low levels throughout the troposphere; something was up.

José Corcho Alvarado of Lausanne University Hospital and colleagues gathered aerosol data that had been collected by military aircraft over Switzerland for most years starting in the 1970s until 2004 along with similar data collected as the ash plume from Eyjafjallajökull traveled over the country in 2010. They then used this data to create a model of the distribution of radioactive particles in the atmosphere over Switzerland from 1970 to the present.

The majority of the plutonium in the stratosphere, they calculated based on concentrations and decay rates, must have been deposited there between 1964 and 1982. That’s consistent with the assumption that nuclear testing and the satellite breakup are the biggest sources of radioactive particles in the atmosphere. The plutonium remains in the stratosphere for an average of 2.5 to 5 years, their model revealed, but a small amount remains circulating in the stratosphere.

“Our results show that significant fractions of radioactive aerosols…remain in the stratosphere for timescales of the order of several decades,” the researchers write.

As for how the radioactive plutonium likely ended up in the volcano’s ash plume, here’s what the researchers propose: The eruption caused thousands of tons of molten rock to come into contact with ice. That interaction created a huge explosion that threw steam and particles into the air, pushing fine-grained ash and gases such as sulfur dioxide into the lower regions of the stratosphere. The ash and sulfur particles picked up plutonium and cesium from the stratosphere and brought the radioactive elements down into the troposphere.

“The strong volcanic eruption of the Eyjafjallajökull volcano has redistributed anthropogenic radionuclides [radioactive particles from human activities] in the lower atmosphere,” the researchers write.

It’s not enough radioactivity for people to worry about—someone born after the tests were done isn’t going to get cancer from plutonium particles in the stratosphere. But it may be enough to help scientists who study the movement of particles through the atmosphere because the radioactive particles act like markers of how air circulates.