Pete Thomas Outdoors, Jan.6, 2014: Scientists find conjoined gray whale calves in Baja California lagoon; discovery could be a first[…] It might be the first documented case of conjoined twin gray whales. […] A database search at the Natural History Museum of Los Angeles County did not reveal published instances of conjoined gray whale twins, or what might also be referred to as Siamese gray whale twins […] Alisa Schulman-Janiger, an American Cetacean Society researcher, pointed out that the twins were underdeveloped and said that pointed to a premature birth. She also wondered about the fate of the mother. […] They give birth during the southbound journey, or in the lagoons, and nurse their calves for several weeks before migrating back to the Bering and Chukchi seas. […] 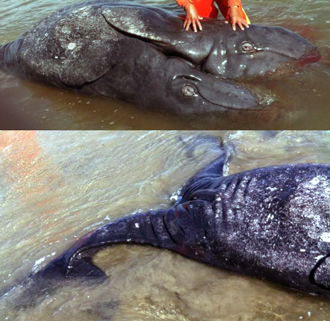 Presna Latina News Agency, Jan. 7, 2014: Fishermen of the Mexican state of Baja California Sur found a baby whale dead with two heads and two tails, which is now under guard of the Directorate General of Wildlife. According to the National Commission of Natural Protected Areas (Conanp) the finding occurred on the afternoon of Sunday […] This is a Conjoined Baby Gray Whales, because there are the two bodies, two heads and two tails, joined by the ventral region, Bermudez told the newspaper El Universal. […]

Huffington Post, Jan. 7, 2014: Conjoined ‘Siamese’ Gray Whale Twins Could Be First Ever […] Footage of the discovery was posted to YouTube where some commenters speculated as to whether the birth defect was perhaps related to Japan’s Fukushima nuclear plant disaster. […] The carcasses have […] reportedly been collected for study […]

L.A. Times, Jan. 6, 2014: The number of gray whales spotted migrating south off the Southern California coast in December was double what it was compared with the same period last year […] whale spotters in December counted 364 gray whales heading south to Baja California […] More than 20,000 gray whales migrate each year from Arctic waters in the north to the shallow lagoons and bays of Baja California. […] 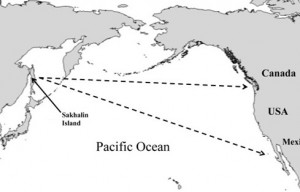 NOAA Fisheries, October 17, 2012: […] scientists were recently surprised to discover that some gray whales from a critically endangered population in Asia cross the Pacific every year to winter off the coast of North America. […] The Eastern North Pacific population […] migrates along the west coast of North America to Baja California […] in 2010, researchers […] tagged a male gray whale with a satellite transmitter near Sakhalin Island and then watched, surprised, as he made his way to the coast of Oregon. The next year, a tagged female made the same journey. […] Were these two whales just a couple of rolling stones, or do gray whales commonly cross the Pacific? […] [Dave Weller, a marine mammal biologist at NOAA’s Southwest Fisheries Science Center] and his colleagues sequentially compared each of 181 photos of whales near Sakhalin Island with more than a thousand photos of whales off the coast of North America. They found ten matches. Because most of the whales that winter on the North American coast do not appear in the photo catalog, the number of matches turned up in this study is probably only a fraction of the number of gray whales that cross the Pacific. […]