Debt burdens in developed nations have become extreme by any historical measure and will require a wave of haircuts, warns IMF paper

Much of the Western world will require defaults, a savings tax and higher inflation to clear the way for recovery as debt levels reach a 200-year high, according to a new report by the International Monetary Fund.

The IMF working paper said debt burdens in developed nations have become extreme by any historical measure and will require a wave of haircuts, either negotiated 1930s-style write-offs or the standard mix of measures used by the IMF in its “toolkit” for emerging market blow-ups.

“The size of the problem suggests that restructurings will be needed, for example, in the periphery of Europe, far beyond anything discussed in public to this point,” said the paper, by Harvard professors Carmen Reinhart and Kenneth Rogoff.

The paper said policy elites in the West are still clinging to the illusion that rich countries are different from poorer regions and can therefore chip away at their debts with a blend of austerity cuts, growth, and tinkering (“forbearance”).

The presumption is that advanced economies “do not resort to such gimmicks” such as debt restructuring and repression, which would “give up hard-earned credibility” and throw the economy into a “vicious circle”. 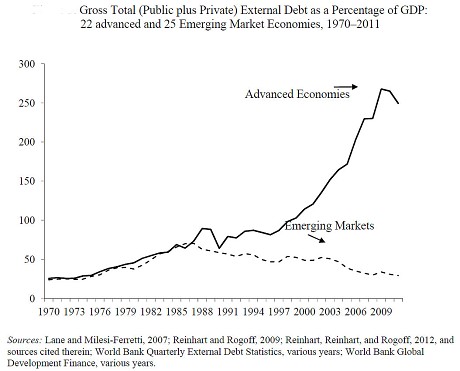 But the paper says this mantra borders on “collective amnesia” of European and US history, and is built on “overly optimistic” assumptions that risk doing far more damage to credibility in the end. It is causing the crisis to drag on, blocking a lasting solution. “This denial has led to policies that in some cases risk exacerbating the final costs,” it said.

While use of debt pooling in the eurozone can reduce the need for restructuring or defaults, it comes at the cost of higher burdens for northern taxpayers. This could drag the EMU core states into a recession and aggravate their own debt and ageing crises. The clear implication of the IMF paper is that Germany and the creditor core would do better to bite the bullet on big write-offs immediately rather than buying time with creeping debt mutualisation.

The paper says the Western debt burden is now so big that rich states will need same tonic of debt haircuts, higher inflation and financial repression – defined as an “opaque tax on savers” – as used in countless IMF rescues for emerging markets.

Most advanced states wrote off debt in the 1930s, though in different ways. First World War loans from the US were forgiven when the Hoover Moratorium expired in 1934, giving debt relief worth 24pc of GDP to France, 22pc to Britain and 19pc to Italy. 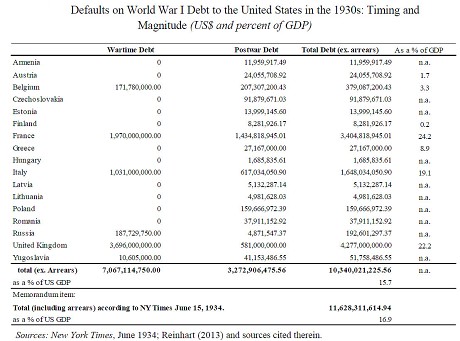 This occurred as part of a bigger shake-up following the collapse of the war reparations regime on Germany under the Versailles Treaty. The US itself imposed haircuts on its own creditors worth 16pc of GDP in April 1933 when it abandoned the Gold Standard.

Financial repression can take many forms, including capital controls, interest rate caps or the force-feeding of government debt to captive pension funds and insurance companies. Some of these methods are already in use but not yet on the scale seen in the late 1940s and early 1950s as countries resorted to every trick to tackle their war debts.

The policy is essentially a confiscation of savings, partly achieved by pushing up inflation while rigging the system to stop markets taking evasive action. The UK and the US ran negative real interest rates of -2pc to -4pc for several years after the Second World War. Real rates in Italy and Australia were -5pc.

Both authors of the paper have worked for the IMF, Prof Rogoff as chief economist. They became famous for their best-selling work on sovereign debt crises over the ages, This Time is Different: Eight Centuries of Financial Folly.

They were later embroiled in controversy over a paper suggesting that growth slows sharply once public debt exceeds 90pc of GDP. Critics say it is unclear whether the higher debt is the problem or whether the causality is the other way around, with slow growth causing the debt ratio to rise to faster.

Critics says extreme austerity without offsetting monetary stimulus is the chief reason why debts have been spiralling upwards even faster in parts of Southern Europe.

The weaker eurozone states are particularly vulnerable to default because they no longer have their own sovereign currencies, putting them in the same position as emerging countries that borrowed in dollars in the 1980s and 1990s. Even so, nations have defaulted through history even when they do borrow in their own currency.