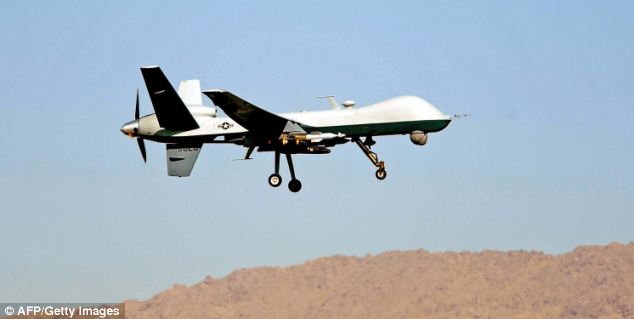 The U.S. Department of Defence (DoD) revealed its Unmanned Systems Integrated Roadmap, which includes plans for drones that can swarm, deviate from a set mission and carry stronger chemical weapons. A current MQ-9 Reaper drone used in Afghanistan is pictured

– Military drones set to get stronger chemical weapons and could soon make their OWN decisions during missions (Daily Mail Jan 2, 2014):

Drones that can choose to deviate from a set mission and hunt in ‘swarms’ could be patrolling skies within the next 25 years, according to a new roadmap.

Unmanned aircraft carrying stronger chemical weapons could also be on the horizon, the U.S. Department of Defence (DoD) revealed in its Unmanned Systems Integrated Roadmap.

While the document sets out plans for unmanned maritime, land and air vehicles, there is a lot of focus on the future capability of controversial drones, which, if the plans come to fruition, could deviate from mission commands set by humans if they spot a better target.

Current drones require intensive manpower on the ground to fly, which is expensive and the DoD plans on cutting costs by letting the machines make more decisions themselves, Live Science reported.

At the moment drones follow precise commands to complete a predetermined step-by-step mission, but the unmanned aircraft of the future could deviate from tasks, informed by ‘laws’ that govern their behaviour, laid out in algorithms and machine learning, as well as advanced sensors.

While drones, or unmanned aircraft, currently use GPS to navigate war zones and remote areas, the satellite signals used by the systems can be jammed easily, so the Defence Advanced Research  Projects Agency (DARPA) is working on jam-proof ‘inertial guidance systems’.

The DoD’s roadmap also features plans for deadly ‘swarms’ of drone-bombs that are launched from an unmanned ‘mothership’ to circle the skies while a human operator searches for targets for the drones to crash into, guided by the bots’ on-bard cameras.

Thanks to the unmanned mothership, the kamikaze drones could have a range of over 250 nautical miles (463km) the roadmap said.

The weapons dropped by more traditional drones are also set to get more deadly under the plans, as researchers are working on ‘energetic nanoparticles’ with a larger surface areas so that the chemicals within the ammunition reach faster and create a more powerful explosion.

The technologies combined are intended to help the U.S. military be ‘more effective through greater automation and greater performance,’ the report says.

1 thought on “U.S. Military Drones Set To Get Stronger Chemical Weapons And Could Soon Make Their OWN Decisions During Missions”