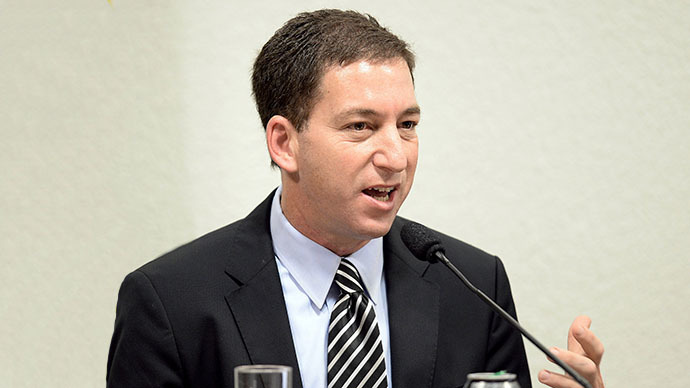 Journalist Glenn Greenwald condemned the mainstream media during an address at a German computer conference on Friday and accused his colleagues of failing to challenge erroneous remarks routinely made by government officials around the globe.

Thousands of attendees at the thirtieth annual Chaos Communication Congress in Hamburg packed into a room to watch the 46-year-old lawyer-turned-columnist present a keynote address delivered less than seven months after he started working with former National Security Agency contractor Edward Snowden.

Revelations contained in leaked documents supplied by Snowden to Greenwald and other journalists have sparked international outrage and efforts to reform the far-reaching surveillance operations waged by the NSA and intelligence officials in allied nations. But speaking remotely from Brazil this week, Greenwald argued that the media establishment at large is guilty of failing significantly with respect to accomplishing its most crucial role: keeping governments in check.

When Greenwald and his colleagues began working with Snowden, he said they realized that they’d have to act in a way that wasn’t on par with how the mainstream media has acted up until now.

“We resolved that we were going to have to be very disruptive of the status quo — not only the surveillance and political status quo, but also the journalistic status quo,” Greenwald said. “And I think one of the ways that you can see what it is that we were targeting is in the behavior of the media over the past six months since these revelations have emerged almost entirely without them and despite them.”

“[W]e knew in particular that one of our most formidable adversaries was not simply going to be the intelligence agencies on which we were reporting and who we were trying to expose, but also their most loyal, devoted servants, which calls itself the United States and British media.”

“It really is the case that the United States and British governments are not only willing but able to engage in any conduct no matter how grotesque,” Greenwald said. Nevertheless, he added, journalists tasked with reporting on those issues have all too often been compliant with the blatant lies made by officials from those governments.

Halfway through his remarks, Greenwald recalled a recent quip he made while being interviewed by BBC about the necessity of a functioning media in an environment where government officials can spew untruths to reporters without being questioned.

“[A]t one point I made what I thought was the very unremarkable and uncontroversial observation that the reason why we have a free press is because national security officials routinely lie to the population in order to shield their power and get their agenda advanced,” recalled Greenwald, who said it is both the “the goal and duty of a journalist is to be adversarial to those people in power.”

According to Greenwald, the BBC reporter met his remark with skepticism.

“I just cannot believe that you would suggest that senior officials, generals in the US and the British government, are actually making false claims to the public,” he remembered being told on-air.

“It really is the central view of certainly American and British media stars, that when — especially people with medals on their chest who are called generals, but also high officials in the government — make claims that those claims are presumptively treated as true without evidence. And that it’s almost immoral to call them into question or to question their voracity,” he said.

“Obviously we went through the Iraq War, in which those very two same governments specifically and deliberately lied repeatedly to the government, to their people, over the course of two years to justify an aggressive war that destroyed a country of 26 million people. But we’ve seen it continuously over the last six months as well.”

From there, he went on to cite the example of US Director of National Intelligence James Clapper, who earlier this year made remarks to Congress that were quickly proved false by documents leaked to Greenwald by Mr. Snowden. The very first National Security Agency document he was shown, Greenwald said, “revealed that the Obama administration had succeeded in convincing court, a secret court, to compel phone companies to turn over to the NSA every single phone record of every single telephone call.”

Clapper “went to the Senate and lied to their faces…which is at least as serious of a crime as anything Edward Snowden is accused of,” Greenwald added.

But DNI Clapper aside, Greenwald said that the established media continues to reject the notion that government officials spew lies. Snowden’s NSA documents have exposed those fibs on more than one occasion, he noted, yet reporters around the world continue to take the word of officials as fact rather than dig from the truth.

“Their role is not to be adversarial. Their role is to be loyal spokespeople to those powerful factions that they pretend to exercise oversight,” Greenwald said.

But as the US, UK and other governments continue to feed the media lies, Greenwald said their operations are far from being single-pronged. The US “knows that its only hope for continuing to maintain its regiment of secrecy behind which it engages with radical and corrupt acts is to intimidate and deter and threaten people who are would-be whistleblowers and transparency activists from coming forward and doing what it is that they do by showing them that they’ll be subjected to even the most extreme punishments and there’s nothing that they can do about it,” he said. “And it’s an effective tactic.”

Ironically, he added, those nations are “fueling the fire of this activism with their own abusive behavior.”

Meanwhile, NSA reform may not happen as quickly as Greenwald, Snowden and others have hoped; despite a series of considerable victories for privacy advocates as of late, a federal judge in New York said moments before Friday’s address that the surveillance policies exposed by those leaks are not in violation of the US Constitution. The American Civil Liberties Union sued DNI Clapper in June after Greenwald and others wrote that the government was compelling telecoms for telephony metadata pertaining to millions of Americans. But District Judge William Pauley wrote on Friday that “Whether the Fourth Amendment protects bulk telephony metadata is ultimately a question of reasonableness.”

And while Judge Pauley and proponents of that program and similar surveillance operations continue to call the NSA’s efforts imperative in America’s war on terror, Greenwald said at Friday’s conference that their intention is much more sinister than stopping another 9/11 from occurring.

The NSA’s goal, Greenwald said, is to “ensure that all forms of human communication . . .are collected, monitored, stored and analyzed by that agency and by their allies.”

1 thought on “Glenn Greenwald: US, British Media Are Servants Of Security Apparatus”