Two months ago, we reported when a female suicide bomber detonated a bomb in a bus in the Russian city of Volgograd, located 400 miles northeast of Sochi where the winter Olympic games begin in just over a month. 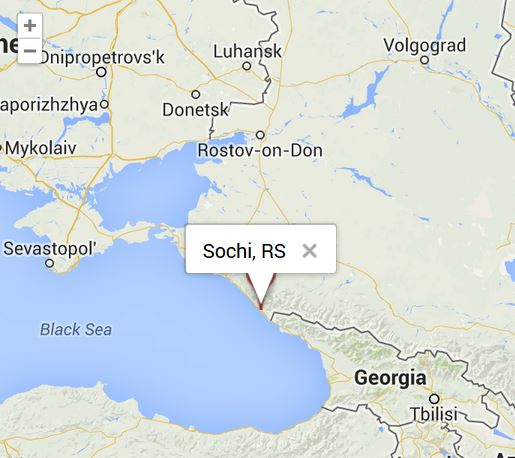 The explosion was caught on dashcam (the video can be seen here). But more than a mere isolated terrorist incident in a region of Russia which has historically been rife with conflict between Russia and Chechen separatists, this explosion, which took place just after Russia managed to impose its will in the Syrian conflict’s outcome, and left Saudi (and Israeli) relations with the US in tatters, we reminded readers just who is the invisible hand behind all terrorist activities in proximity to Sochi: Saudi Arabia.

Recall from our commentary on the October Volgograd explosion:

Disturbing as this video is, we believe it is only going to get worse as the Sochi 2014 Winter Olympics approach. Recall from “Meet Saudi Arabia’s Bandar bin Sultan: The Puppetmaster Behind The Syrian War“:

Bandar told Putin, “…The terrorist threat is growing in light of the phenomena spawned by the Arab Spring. We have lost some regimes. And what we got in return were terrorist experiences, as evidenced by the experience of the Muslim Brotherhood in Egypt and the extremist groups in Libya…. As an example, I can give you a guarantee to protect the Winter Olympics in the city of Sochi on the Black Sea next year. The Chechen groups that threaten the security of the games are controlled by us…

Was today’s terrorist explosion just a warning shot ultimately funded and organized by none other than the biggest loser from the Syrian detente: Saudi Arabia, because recall that it was Saudi Arabia which orchestrated the near-US invasion after playing Obama and Kerry like a fiddle, in hopes of getting the natgas pipeline under Syria. Following the Putin-brokered peace plan, Saudi will now have to wait at least one more year before re-escalating tensions in the Syria region with hopes of installing its own puppet regime.  In the meantime, is Saudi now openly lashing out at the one country that made this delay a reality. And if so, when, where and how will Putin retaliate against the country that serves as the anchor of the petrodollar system? We look forward to finding out.

It’s two months later and if indeed Bandar bin Sultan is in funding and enabling the local terrorists, then Saudi Arabia is increasingly demonstrating its displeasure with Russia, and furthermore, sending a warning to the world that the Sochi games may be hazardous to one’s health. Overnight, another almost identical explosion rocked Volgograd, when a female suicide bomber set off a bomb in one of the five largest train stations in Russia in what is a clear warning to Russia as the Winter Olympics approach.

This is what happened earlier today:

A suicide bombing has killed at least 14 people and injured over 40 in the southern Russian city of Volgograd, raising concerns about terrorism just over a month before Russia hosts the 2014 Winter Olympic Games. The train station attacked today is one of the five largest in Russia
and is a major transit point for much of southern Russia. It was unclear
whether the train station was the woman’s intended target or whether
she planned to travel elsewhere to carry out an attack.

A female bomber carried out the blast in a Volgograd train station, 400 miles from the site of the upcoming Olympics in the Russian resort town of Sochi, Russian authorities said. The Sochi 2014 Olympic Games are scheduled to begin on Feb. 7. A total of 33 people were hospitalized, with eight in serious condition and one in “extremely serious condition,” Oleg Solagai, a spokesman for the Russian health ministry, told Russian news agency Rossiya24.

Authorities in Volgograd said the attack left 27 people seriously injured, and that the death toll may increase. A police officer was among the dead, and a nine-year-old girl was injured, authorities said.

A severed head found at the site of the bombing is suspected to be that of the woman who carried out the attack, making it “possible to identify her,” a Volgograd law enforcement source told the Russian news agency Interfax. Investigators have reason to believe the woman came from Russia’s Dagestan region, the source told the agency.

The bombing took place in the same city where another female suicide bomber was blamed for an attack an October bus attack that killed seven people, including the bomber.  Like the October bomb attack, today’s blast was caught on camera. Surveillance video showed the exact moment the explosion took place, just inside an entranceway to the train station.

Volgograd reeled from the attack just before the New Year’s celebrations, a major holiday in Russia that would have likely meant a high amount of traffic was passing through the train station today. Yulia Chemova with Volunteers of Russia, who was at the railway station minutes after the attack to help out, told ABC News she believed the attack was planned around the New Year holiday.

“The timing for the terrorist attack in Volgograd is perfect,” she said. “It’s holiday season; airports and train stations are packed at this time of year.”

There have been 32 terrorist attacks in Russia in the year ahead of Sochi 2014, according to Kavkazskiyuzel, a Russian think tank.

The power of today’s explosion was equivalent to at least 22 pounds of TNT, and police officers averted a much larger tragedy by stopping the woman right at the entrance to the train station, according to a committee investigating the attack. Had she made it inside, a spokesman for the committee said, casualties could have reached the hundreds. Russia’s interior ministry said it would deploy more police at all rail stations in Russia and that passengers would be subject to strict security measures.

Today’s attack bore some similarities to the October bus bombing, which authorities said was also carried out by a woman from Dagestan. Russia has for years been fighting an Islamist insurgency in the North Caucasus, a region that encompasses the restive Russian regions of Chechnya and Dagestan, as well as the Olympic host city, Sochi.

Suicide bombers, often female, from Chechnya or Dagestan and sometimes known as “black widows,” have carried out many attacks on Russian targets in the past decade, including the dual bombing of the Moscow subway in 2010 that claimed 39 lives. Female bombers from the Caucasus were also blamed for the simultaneous bombing of two Russian airplanes in 2004, an attack that killed 90 people.

And, as noted, the explosion was caught on video and can be seen below:

So, like before, if Saudi Arabia is doing its best to poke Vladimir Putin with ever escalating provocations, how long until the former KGB spy retaliates?