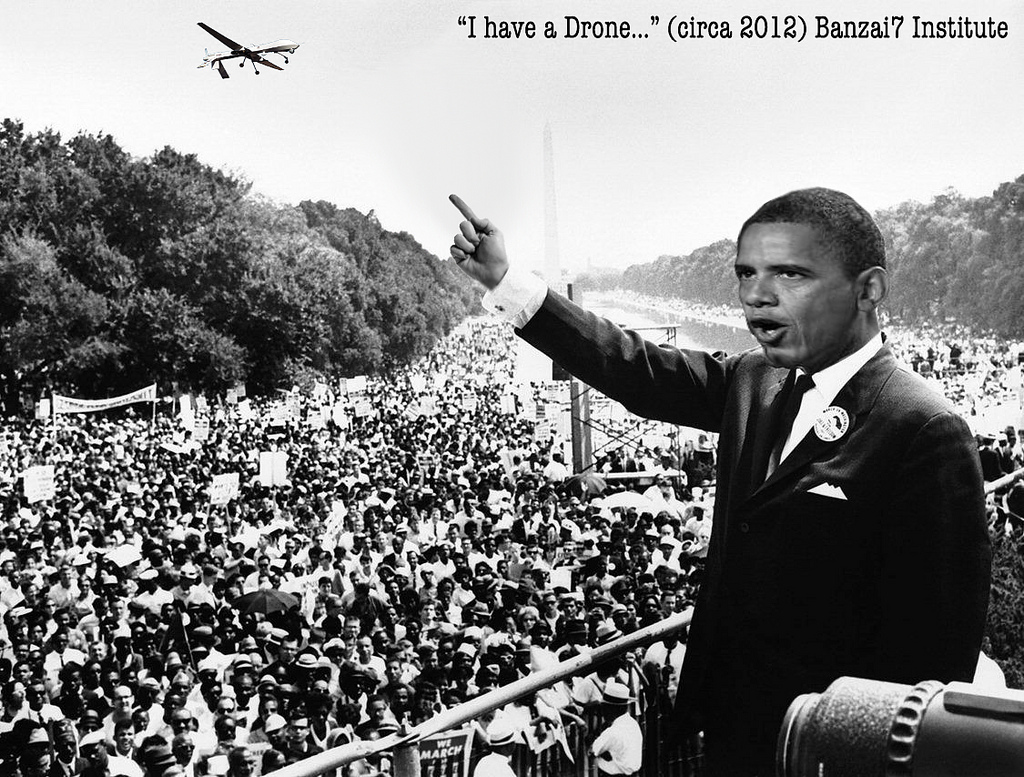 There has been yet another violent attack with mass casualties. This was not the act of a lone gunman, or of an armed student rampaging through a school. It was a group of families en route to a wedding that was killed. The town was called Radda—not in Colorado, not in Connecticut, but in Yemen. The weapon was not an easy-to-obtain semiautomatic weapon, but missiles fired from U.S. drones. On Thursday, Dec. 12, 17 people were killed, mostly civilians. The London-based Bureau of Investigative Journalism has consistently tracked U.S. drone attacks, recently releasing a report on the six months following President Barack Obama’s major address on drone warfare before the National Defense University (NDU) last May. In that speech, Obama promised that “before any strike is taken, there must be near-certainty that no civilians will be killed or injured—the highest standard we can set.” The BIJ summarized, “Six months after President Obama laid out U.S. rules for using armed drones, a Bureau analysis shows that covert drone strikes in Yemen and Pakistan have killed more people than in the six months before the speech.” In a nation that abhors the all-too-routine mass killing in our communities, why does our government consistently kill so many innocents abroad?

One significant problem with assessing the U.S. drone-warfare program is its secrecy. U.S. officials rarely comment on the program, less so about any specific attack, especially where civilian deaths occur. As Obama admitted in the speech, “There’s a wide gap between U.S. assessments of such casualties and nongovernmental reports. Nevertheless, it is a hard fact that U.S. strikes have resulted in civilian casualties.” The BIJ’s estimate of the death toll from U.S. drone strikes during the past 12 years in Pakistan, Yemen and Somalia is well over 4,000.

While the U.S. media shower attention on the hypothetical prospects that in the next few years, Amazon.com will deploy clever little drones to deliver your holiday orders, it is important to take a hard look at what these airborne robots are actually doing now. “Democracy Now!” correspondent Jeremy Scahill has been exposing U.S. covert warmaking for years, most recently in his book and film “Dirty Wars.” The film was just shortlisted for an Oscar for best documentary. After the Academy Award nomination was made, he told us, “I hope that people pay attention to these stories, that Americans will know what happened to the Bedouin villagers in al-Majalah, Yemen, where three dozen women and children were killed in a U.S. cruise missile strike that the White House tried to cover up.”

In his NDU address, Obama said, “We act against terrorists who pose a continuing and imminent threat to the American people.” Neither Obama nor any of his aides have explained just what kind of threat the wedding convoy presented to the American people. The government of Yemen, following local custom, made reparations to the victimized families, reportedly delivering 101 Kalashnikov rifles and a little over $100,000.

These rural villages in Yemen are caught in the middle of a violent conflict, as Human Rights Watch wrote in an October report titled “Between a Drone and Al-Qaeda.” Just one month to the day before Obama gave his address at the NDU, Farea al-Muslimi, an eloquent young Yemeni man who spent a year attending a U.S. high school, spoke before a congressional hearing. Six days before he testified, a drone strike hit his village of Wessab. Farea said: “What Wessab’s villagers knew of the U.S. was based on my stories about my wonderful experiences here. … Now, however, when they think of America, they think of the terror they feel from the drones that hover over their heads, ready to fire missiles at any time. What the violent militants had previously failed to achieve, one drone strike accomplished in an instant. There is now an intense anger against America in Wessab.” He ended his testimony with the hope that “when Americans truly know about how much pain and suffering the U.S. air strikes have caused … they will reject this devastating targeted killing program.”

The scenes of senseless violence in the U.S. form a list of sorrow and loss: Columbine, Tucson, Aurora, Newtown, Littleton. With the ongoing work of committed activists, courageous journalists and responsible officials, perhaps Americans will recite as well the names Gardez, Radda, al-Majalah, Mogadishu and the many more sites of drone strikes still cloaked in secrecy.