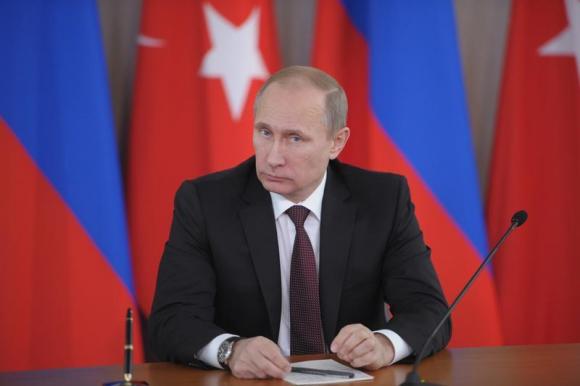 While the US is debating which set of Al Qaeda “rebels” in Syria is the best local partner for the State Department to provide military support to, once Qatar’s demands for a trans-Syria pipeline return some time in 2014, Vladimir Putin – fresh from his diplomatic coup in the Ukraine – is reinforcing his other major victory in 2013: the preservation of the Assad state, this time however with more than words. As Reuters reports, Russia has sent 25 armored trucks and 50 other vehicles to Syria to help transport toxins that are to be destroyed under an international agreement to rid the nation of its chemical arsenal, Defense Minister Sergei Shoigu said on Monday.

Or in other words, Russia just sent Syria more than 75 military vehicles.

In a report to President Vladimir Putin, Shoigu said Russian aircraft delivered 50 Kamaz trucks and 25 Ural armored trucks to the Syrian port city of Latakia on December 18-20 along with other equipment, state-run news agency RIA reported.

“The Defence Ministry has very swiftly implemented actions to deliver to Syria equipment and materiel to provide for the removal of Syrian chemical weapons and their destruction,” Shoigu was quoted as saying.

Unlike Obamacare’s scheduling issues, Syria is expected to honor its commitment to transfer its chemcial weapons to external control by the deadline.

Damascus agreed to transport the “most critical” chemicals, including around 20 tons of mustard nerve agent, out of the northern port of Latakia by December 31 to be safely destroyed abroad away from the war zone.

“The Defence Ministry has very swiftly implemented actions to deliver to Syria equipment and materiel to provide for the removal of Syrian chemical weapons and their destruction,” Shoigu was quoted as saying.

And while the west may have bungled both the Syrian escalation and the more recent return of the Ukraine to the Russian sphere of influence, they were at least smart enough to realize that Russia adding more weapons in Syria will hardly allow the EU to benefit from Qatari gas in the near future.

Western powers has baulked at Syria’s request for military transport equipment to transport chemical weapons material to Latakia because of concerns it could be used to fight Assad’s opponents in the conflict or kill civilians.

Russia has been a major seller of conventional weapons to Syria and has given Assad crucial support during the conflict, blocking attempts to punish with sanctions and saying his exit must not be a precondition for a peace process.

Syrian government forces took control of a key highway connecting Damascus to the coast earlier this month, but the Organisation for the Prohibition of Chemical Weapons has voiced concern the deadline could be missed.

But for all intents and purposes, Syria and the Middle East may be yesterday’s news. The one “asset” that Putin is certainly focued on next, as is China, as is the US, is Africa: it is here that the geopolitical hotspots of 2014 are far more likely to generate significant headaches for the superpowers (unless of course Israel decides it needs the GDP boost and launches the Iranian attack on its own).

1 thought on “Russia Sends Over 75 Armored Trucks To Syria”