– Producer of Physical “Casascius” Bitcoins is Being Targeted by the Feds (Liberty Blitzkrieg, Dec 12, 2013):

Meet Mike Caldwell. He is the maker of what seems to be the most popular physical bitcoins on the market, the Casascius coin. All Mr. Caldwell does is have people who want the coins produced send him a certain quantity of bitcoin and then for a $50 fee he puts the private key on a physical coin and sends them back. For this horrible crime of ingenuity and creativity, the U.S. government naturally, has decided to target him. Because they are too busy ignoring the real financial crimes happening out out there… 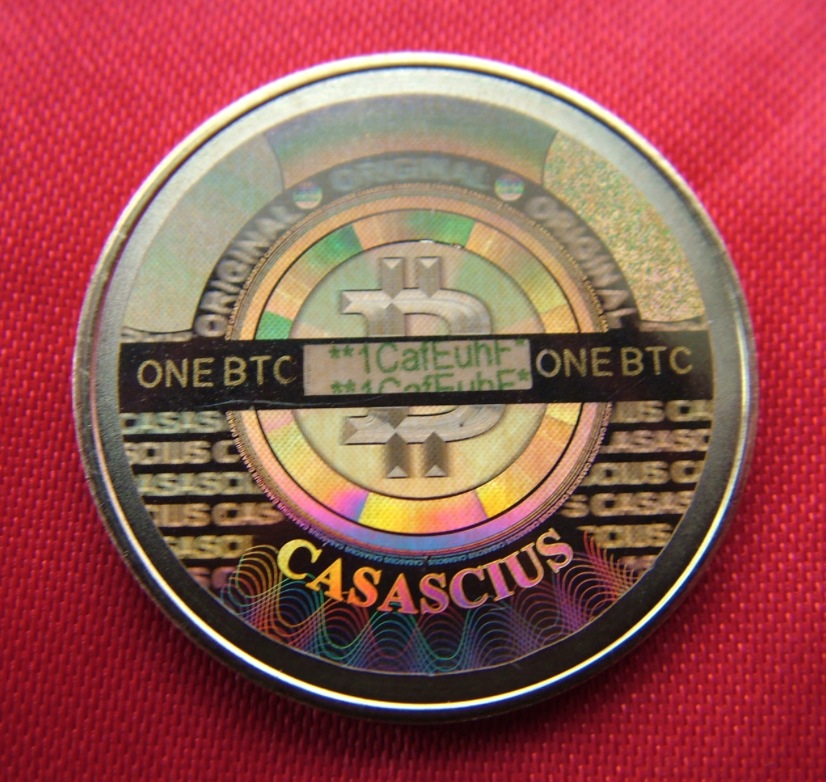 Mike Caldwell spent years turning digital currency into physical coins. That may sound like a paradox. But it’s true. He takes bitcoins — the world’s most popular digital currency — and then he mints them here in the physical world. If you added up all the bitcoins Caldwell has minted on behalf of his customers, they would be worth about $82 million.

Basically, these physical bitcoins are novelty items. But by moving the digital currency into the physical realm, he also prevents hackers from stealing the stuff via an online attack. Or at least he did. His run as the premiere bitcoin minter may be at an end. Caldwell has been put on notice by the feds.

Just before Thanksgiving, he says, he received a letter from the Financial Crimes Enforcement Network, or FINCEN, the arm of the Treasury Department that dictates how the nation’s anti-money-laundering and financial crime regulations are interpreted. According to FINCEN, Caldwell needs to rethink his business. “They considered my activity to be money transmitting,” Caldwell says. And if you want to transmit money, you must first jump through a lot of state and federal regulatory hoops Caldwell hasn’t jumped through.

But HSBC launders billions for Mexican drug cartels and they can continue their operations no problem.

Caldwell doesn’t accept U.S. dollars or any type of fiat currency. You send him bitcoins via the internet, and he sends you back metal coins via the U.S. Postal Service. To spend bitcoins, you need a secret digital key — a string of numbers and letters — and when Caldwell makes the coins, he hides this key behind a tamper-resistant strip.

So long as you can keep your Casascius bitcoins safe, nobody can learn the key. To date, Caldwell has minted nearly 90,000 bitcoins in various denominations. That’s worth about $82 million at today’s exchange rate.

Because he runs a bitcoin-only business, Caldwell says there’s no Casascius bank account for authorities to seize. But he adds that he has no desire to anger the feds, whether he agrees with them or not. So he’s cranking out his last few orders and talking to his lawyer. He says this may spell the end of Casascius coins. “It’s possible. I haven’t come to a final conclusion,” he says.

What a complete and total joke this government is. Don’t they have anything better to do?