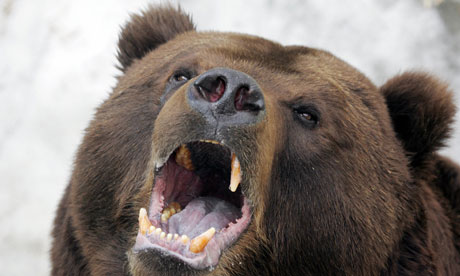 – How Far Will Stocks Fall This Time When The Fed Decides To Slow Down Quantitative Easing? (Economic Collapse, Dec 11, 2013):

A lot of people out there are claiming that the Federal Reserve will never end this round of quantitative easing.  They are suggesting that the Fed may hint at tapering from time to time, but that when push comes to shove they will just keep printing more money.

There is just one big problem with that theory.

Our current economic prosperity greatly depends upon the rest of the planet using our dollars as the reserve currency of the world and lending trillions of dollars to us at ultra-low interest rates.  If the rest of the world decides to stop going along with the program, the system would come crashing down very rapidly.

That is why it was so alarming when China recently announced that they are going to quit stockpiling more U.S. dollars.  For a long time China has been warning us to quit recklessly printing money, and now China is starting to make moves that will make them more independent of us financially.

If the Fed does not bring quantitative easing to an end soon, other nations may start doing the same thing.

So the Fed knows that they are on borrowed time.  Faith in the U.S. financial system is declining very fast.

But the Fed also knows that ending QE3 is going to be very tricky for the financial markets.  The other times that the Fed has ended quantitative easing, it has turned out to be very painful for Wall Street.

So this time, the Fed seems to be trying to do what it can to use the media to mentally prepare investors ahead of time.  For example, the following is what Jon Hilsenrath of the Wall Street Journal wrote just a few days ago…

Markets are positioned more to the Fed’s liking today than they were in September, when it put off reducing, or “tapering,” the monthly bond purchases. Most notably, the Fed’s message is sinking in that a wind down of the program won’t mean it’s in a hurry to raise short-term interest rates. Futures markets place a very low probability on Fed rate increases before 2015, in contrast to September, when fed funds futures markets indicated rate increases were expected by the end of 2014. The Fed has been trying to drive home the idea that “tapering is not tightening” for months and is likely to feel comforted that investors believe it as a pullback gets serious consideration.

In case you missed the subtle messages contained in that paragraph, here is a rough translation…

“Don’t worry.  The Federal Reserve is your friend and they say that everything is going to be okay.  Investors believe what the Fed says and you should too.  Pay no attention to the man behind the curtain.  Tapering is not tightening, and when the Federal Reserve does decide to taper the financial markets are going to take it very calmly.”

The Fed (and their messengers) very much want to avoid a repeat of what has happened before.  As you can see from the chart posted below, every round of quantitative easing has driven the S&P 500 much higher.  And when each round has ended, there has been a substantial stock market correction.  The following chart was originally produced by DayOnBay.org… 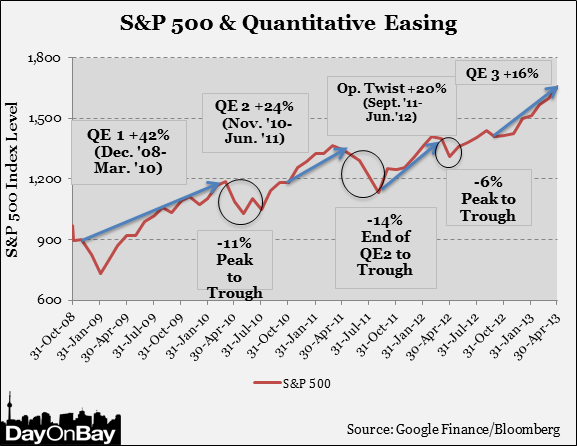 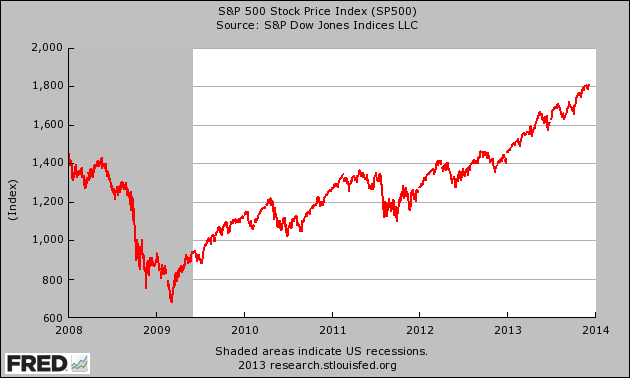 In a panic, the Federal Reserve first hinted at QE2 and then finally formally announced it.  That round of QE drove the S&P 500 up to a bit above the 1,300 mark.

In another panic, the Federal Reserve first announced “Operation Twist” and then later added QE3.  Since that time, the S&P 500 has been on an unprecedented tear.  At this point, the S&P is sitting at about 1,800.

And of course those massively inflated stock prices have absolutely no relation to what is going on in the U.S. economy as a whole.  In fact, the truth is that economic conditions for most of the country are steadily getting worse.  Just today we found out that for the week ending November 30th, U.S. rail traffic was down 16.3 percent from the same week one year earlier.  That is a hugely negative sign.  It means that the flow of goods is slowing down substantially.

So the Federal Reserve has created this massive financial bubble that is totally disconnected from reality.  The only way that the Federal Reserve can keep this bubble going is to keep printing lots more money, but they also know that they cannot do that indefinitely because the rest of the world is watching.

In essence, the Federal Reserve is caught between a rock and a hard place.

When the Fed does ultimately decide to taper (whether it be December, January, February, etc.), the consequences are likely to be quite dramatic for the financial markets.  The following is a brief excerpt from a recent article by Howard Kunstler…

But even in a world of seemingly no consequence, things happen. One pretty sure thing is rising interest rates, especially when, at the same time as a head-fake taper, foreigners send a torrent of US Treasury paper back to the redemption window. This paper is what other nations, especially in Asia, have been trading to hose up hard assets, including gold and real estate, around the world, and the traders of last resort — the chumps who took US T bonds for boatloads of copper ore or cocoa pods — now have nowhere else to go. China alone announced very loudly last month that US Treasury debt paper was giving them a migraine and they were done buying anymore of it. Japan is in a financial psychotic delirium scarfing up its own debt paper to infinity. Who’s left out there? Burkina Faso and the Kyrgystan Cobblers’ Union Pension Fund?

The interest rate on the US 10-year bond is close to bumping up on the ominous 3.0 percent level again. Apart from the effect on car and house loans, readers have pointed out to dim-little-me that the real action will be around the interest rate swaps. Last time this happened, in late summer, the too-big-to-fail banks wobbled from their losses on these bets, providing a glimpse into the aperture of a black hole compressive deflation where cascading chains of unmet promises blow financial systems past the event horizon of universal default and paralysis where money stops moving anywhere and people must seriously reevaluate what money actually is.

What Kunstler is talking about is something that I have written about previously many times.  When QE3 slows down (or ends), that is likely going to cause the yield on 10 year U.S. Treasuries to rise substantially, and that would have a whole host of negative consequences for the U.S. economy.

Most notably, it would threaten to blow up the quadrillion dollar derivatives casino that Wall Street usually manages to keep so delicately balanced.

The truth is that we are going to have massive problems no matter what the Federal Reserve does now.

If the Federal Reserve keeps wildly printing money, our financial system will become a massive joke to the rest of the planet and other nations will stop using our dollars and will stop lending us money.

That would be absolutely disastrous.

If the Federal Reserve stops wildly printing money, the massive financial bubble that Wall Street is enjoying right now will burst and we could have a financial crisis even greater than what we experienced back in 2008.

That would also be absolutely disastrous.

So does anyone out there see an easy way out of this under the current system?  If you think that you have such a plan, please feel free to share it below…

1 thought on “How Far Will Stocks Fall This Time When The Fed Decides To Slow Down Quantitative Easing?”