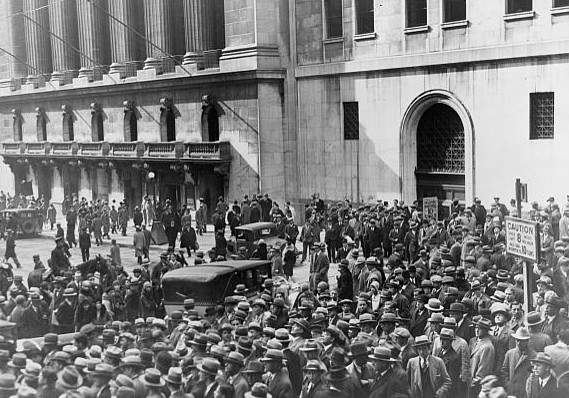 Crowd of people gather outside the New York Stock Exchange following the Crash of 1929.

They say those who forget the lessons of history are doomed to repeat them.

As a student of market history, I’ve seen that maxim made true time and again. The cycle swings fear back to greed. The overcautious become the overzealous. And at the top, the story is always the same: Too much credit, too much speculation, the suspension of disbelief, and the spread of the idea that this time is different.

It doesn’t matter whether it was the expansion of railroads heading into the crash of 1893 or the excitement over the consolidation of the steel industry in 1901 or the mixing of speculation and banking heading into 1907. Or whether it involves an epic expansion of mortgage credit, IPO activity, or central-bank stimulus. What can’t continue forever ultimately won’t.

The weaknesses of the human heart and mind means the swings will always exist. Our rudimentary understanding of the forces of economics, which in turn, reflect ultimately reflect the fallacies of people making investing, purchasing, and saving decisions, means policymakers will never defeat the vagaries of the business cycle.

So no, this time isn’t different. The specifics may have changed, but the themes remain the same.

In fact, the stock market is right now tracing out a pattern eerily similar to the lead up to the infamous 1929 market crash. The pattern, illustrated by Tom McClellan of the McClellan Market Report, and brought to his attention by well-known chart diviner Tom Demark, is shown below. 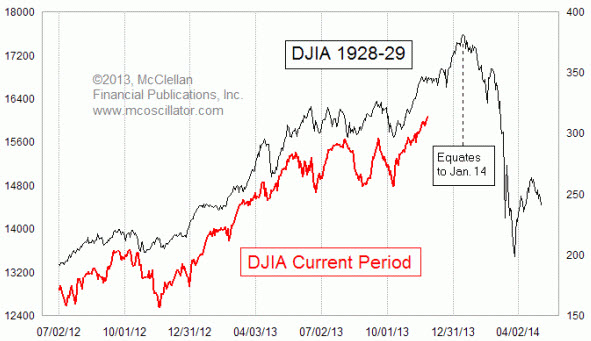 Excuse me for throwing some cold water on the fever dream Wall Street has descended into over the last few months, an apparent climax that has bullish sentiment at record highs, margin debt at record highs, bears capitulating left and right, and a market that is increasingly dependent on brokerage credit, Federal Reserve stimulus, and a fantasy that corporate profitability will never again come under pressure.

On a pure price-analogue basis, it’s time to start worrying.

All we’re doing now is pushing on the proverbial string. Trillions in unused bank reserves are piling up. The housing market has stalled after the “taper tantrum” earlier this year caused mortgage rates to shoot from 3.4% to 4.6% between May and August. The Treasury market is getting distorted as the Fed effectively monetizes a growing share of the national debt. Emerging-market economies are increasingly vulnerable to a currency crisis once the taper finally starts.

The Fed knows it. But they’re trapped between these risks and giving the market — the one bright spot in the post-2009 recovery — serious liquidity withdrawals.

But the specifics of the run up to the 1929 crash provide true bone-chilling context for what’s happening now.

The Bernanke-led Fed’s enthusiasm for avoiding the mistakes that worsened the Great Depression—- a mistimed tightening of monetary conditions — has led him to repeat the mistakes that caused it in the first place: Namely, continuing to lower interest rates via Treasury bond purchases well into an economic expansion and bull market justified by low-to-no inflation.

(Side note here: As economist Murray Rothbard of the Austrian School wrote in America’s Great Depression, prices dropped then, as now, because of gains in productivity and efficiency.)

Here’s the kicker: The Fed (mainly the New York Fed under Benjamin Strong) was knee deep in quantitative easing in the late 1920s, expanding the money supply and lowering interest rates via direct bond purchases. Wall Street then, as now, was euphoric.

Fed policymakers felt like heroes as they violated that central tenant of central banking as outlined in 1873 by Economist editor Walter Bagehot in his famous Lombard Street: That they should lend freely to solvent banks, at a punitive interest rate in exchange for good quality collateral. Central-bank stimulus should only be a stopgap measure used to stem panics, a lender of last resort; not act as a vehicle of economic deliverance via the printing press.

It’s being violated again now as the mistakes of history are repeated once more. Bernanke will be around to see the results of his mistakes and his misguided justification that quantitative easing is working because stock prices are higher, ignoring evidence that the “wealth effect” isn’t working.

Strong died in 1928, missing the hangover his obsession with low interest rates and credit expansion caused after bragging, in 1927, that his policies would give “a little coup de whisky to the stock market.