– Japan Official: “This is the way the reign of terror begins!” — Lawmaker is “physically restrained”; Outrage as secrets bill rammed through — Final passage expected within hours (PHOTOS) (ENENews, Dec 5, 2013):

The Guardian, Dec. 5, 2013: Whistleblowers and journalists in Japan could soon find themselves facing long spells in prison for divulging and reporting state secrets, possibly including sensitive information about the Fukushima nuclear disaster […] “It is a threat to democracy,” said Keiichi Kiriyama, an editorial writer for the Tokyo Shimbun newspaper […] “it can be used to hide whatever the government wishes to keep away from public scrutiny,” said Mizuho Fukushima, an opposition MP. […] justice minister, Sadakazu Tanigaki, refused to rule out police raids of newspapers suspected of breaking the law. 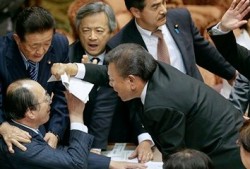 The Japan Times, Dec. 5, 2013: Secrets bill clears panel by force […] The Liberal Democratic Party-New Komeito ruling coalition was set to forcibly pass the contentious state secrecy bill into law as early as Thursday night, after it rammed the legislation through the Upper House Special Committee on National Security earlier on the day. The chairman of the committee abruptly motioned for a vote on the bill, and ruling bloc lawmakers voted, while opposition lawmakers tried to block it by surrounding and shouting at him. “The committee chairman did not even mention that they will vote on it when we had a meeting before the session,” said Tetsuro Fukuyama, an Upper House member of the committee from the Democratic Party of Japan. “They again leveraged on the power of numbers. I am beyond angry.”

Wall St. Journal, Dec. 5, 2013: […] the administration of Prime Minister Shinzo Abe [succeeded in] railroading a controversial state intelligence bill through a parliamentary debate Thursday. […] In ramming the draft legislation through a special committee on national security, Mr. Abe made abundantly clear he was willing to use the force of greater numbers […] Thursday’s ruckus in the security committee, widely broadcast on the evening television news, hardly gave the impression of a united opposition tackling an overreaching government, or a patient administration with a sympathetic ear to opposition concerns. “It’s making a mockery of parliament,” said DPJ lawmaker Tetsuro Fukuyama […] 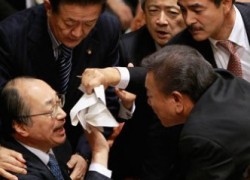 Xinhua, Dec. 5, 2013: […] so outraged was opposition  in the committee meeting Thursday, that [lawmaker Hirokazu Shiba] rose from his seat and shouted “This is the way the reign of terror begins!” His fervor led to his fellow lawmakers having to physically restrain Shiba, as tensions in the meeting reached fever pitch. Meanwhile, protests comprising more than 7,000 demonstrators continued around the Diet building, mobilized by civic groups, unions and concerned individuals, following similar scenes Wednesday that saw more than 6,000 anti-secrecy law opponents march around the Diet building hand-in-hand.

Variety, Dec. 5, 2013: The film industry worries that not only might the legislation help the government cover up embarrassing situations – like the mismanagement at electricity generator TEPCO whose nuclear reactor at Fukushima melted down after the tsunami – but that film-makers may once again be required to produce propaganda movies.

1 thought on “Japan Official: ‘This Is The Way The Reign Of Terror Begins!’ – Lawmaker Is ‘Physically Restrained’; Outrage As Secrets Bill Gets Rammed Through”