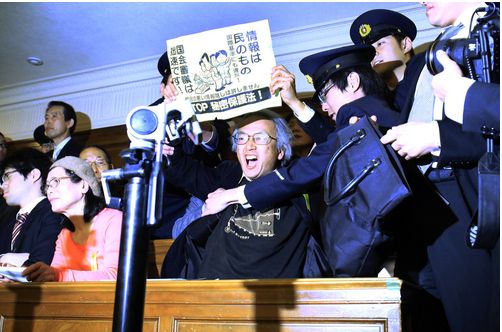 Police grab a man in the visitor’s gallery as he shouts protests against the special secrets bill at the House of Representatives special committee on national security, at the Diet building in Tokyo on Nov. 26. (Mainichi)

Mainichi, Nov. 27, 2013: The ruling coalition’s ramming of a controversial special state secrets bill […] through the House of Representatives on Nov. 26 has stunned the public. […] it could discourage citizens as well as journalists from seeking access to such information for fear of harsh punishment, blocking government information from circulating in society […]

Japan-based Investigative Journalist Jake Adelstein, Nov. 29, 2013: […] even politicians inside the ruling bloc are saying, “It can’t be denied that another purpose is to muzzle the press, shut up whistleblowers, and ensure that the nuclear disaster at Fukushima ceases to be an embarrassment before the Olympics.” […] And most tellingly, Masako Mori, the Minister of Justice, has declared that nuclear related information will most likely be a designated secret. For the Abe administration this would be fantastic way to deal with the issue of tons of radiated water leaking  […] There seems to be no end to stopping the toxic waste leaks there but the new legislation would allow the administration to plug the information leaks permanently. As [it] continues to pour into the ocean and our food supply, it is an ominous sign that the Japanese government refuses to disclose information about the levels of pollution […]

Mainichi, Nov. 27, 2013: Under the bill, ordinary citizens who aid and abet or conspire with others in leaking information classified as special state secrets could face up to five years in prison even if the information were not actually revealed. If citizens were indicted for obtaining special secrets under the legislation, they could be convicted without the content of the information being clarified.

Mainichi, Nov. 27, 2013: One of the [Fukushima] residents angrily said, “How far are they going to go in fooling us?” […]  a member of the Diet’s investigation committee on the Fukushima nuclear disaster, said, “I hope information involving the lives of residents will not be made secret.”

Bellona, Nov. 29, 2013: […] The current condition of the Fukushima Daiichi plant is precarious – arguably worse off than it was directly following the initial catastrophe […] seemingly continuous leaks of highly radioactive water […] The disposition of the fuel in the melted down reactors is unknown […] no real consensus on what on what might stop or at least diminish the leaks of some 400 metric tons a day of radioactive water into the Pacific. […] it’s understandable that Abe would like to stuff a sock in the bad news […]

“Stuff a sock in the bad news”? Indeed…

EXSKF, Nov. 29, 2013: A citizen was forcibly removed from the balcony in the Diet where he was observing the debate […] as he shouted his opposition to the passage of the law. His mouth was stuffed with cloth so that he couldn’t shout any more […]