The difficulty of US workers to obtain “desirable” jobs has been noted here previously. Recall in 2012 when Delta received 22,000 applications for about 300 flight attendant jobs in the first week after posting the positions outside the company (which was an improvement from 2010, when the Atlanta-based carrier received 100,000 applications for 1,000 jobs when it last hired flight attendants in October 2010). Or when in 2011 McDonalds hired 62,000 minimum wage applicants out of one million total applicants. However, that is nothing compared to the job seeking frenzy in China, where as AFP reports, more than one million people took China’s national civil service exam at the weekend in a modern version of an age-old rite, but faced huge odds against clinching one of the few government jobs available. A total of 1.12 million took the National Public Servant Exam, according to figures from the State Administration of Civil Service figures. How many total job openings were there? A tiny 19,000 according to China’s Global Times, meaning less than 1 on 50 would be successful. 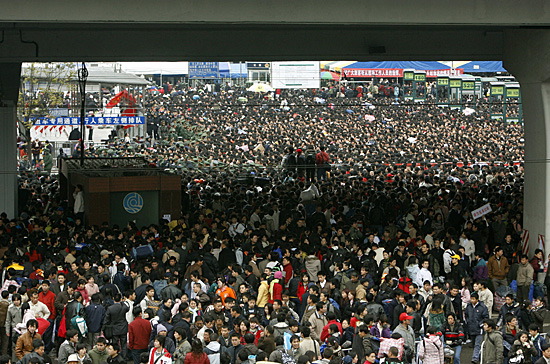 But that’s just the tip of the scramble. According to AFP, the most competitive role was with the National Ethnic Affairs Commission, where 14,384 candidates were vying for just two jobs. Why the surge in applicants? “Domestic reports said it was so popular because the application process appeared to be less arduous than for other positions.” Somehow math suggest that over 7,000 applicants for one job means a somewhat more “arduous” application process, not less.

As for the allure of government jobs, the story here is well-known: job safety coupled with an easy living in which one isn’t expected to do much of anything:

Government jobs are especially appealing to Chinese because they are seen as stable employment and bring with them a range of privileges, as well as the status of being an official. The benefits can include living allowances, pensions, health insurance and even property — a valuable commodity in China’s prolonged housing boom.

The current civil service test is a legacy of the ancient imperial examination known as the keju, introduced during the Sui Dynasty, which ruled from 580-618 AD, and often regarded as a key meritocratic element of the governing system.

Early forms of the examinations were largely based on Confucian texts. They were open only to boys who were able to complete their education, either because of family wealth or sponsorship by benefactors.

In the US the pinnacle of professional development may mean ending up as a hedge fund billionaire on Twitter and moving stocks with nothing but a buy or sell recommendation in under 140 characters, but in China it is all about the government jobs:

The tests were only held every three years, and local officials would often present those who passed with a special banner to be hung at the entrance to their home, to ensure the success was remembered for generations.

The amusing nature of this process was not lost on the locals:

Many posters on Sina Weibo, a Chinese version of Twitter, ridiculed the candidates. “This really is China’s peculiar landscape”, said one poster with the username “Law and its value”.

“Do they really want to pass the test to ‘serve the people’? No. They desperately hope to go and enjoy a privileged system of wages.”

Another said: “Every time (they take the test), they are in fact just competing to be able to take bribes and bend the law.”

Other netizens asked whether more civil servants were needed in China, following government pledges to cut down on bureaucracy.

“Who wouldn’t want to have a job that is guaranteed for life?” said one netizen.

“But the real question should be: ‘Is it really necessary to recruit tens of thousands of civil servants every year?'”

The answer: of course it is. How else can the world’s second most centrally-planned economy and market (after the US of course) preserve the illusion of 7%+ growth unless it created as many government jobs as needed to fill the daily growing slack. But if you think 7000 applicants for 1 “desired” job is bad, wait until the full impact of China’s easing of its 1 child policy is felt…