Before it became a conspiracy fact, the traditional response to all suggestions of a massive Libor/FX/commodity/mortgage rigging cartel was a simple if stupid one: too many people are involved and so it can never be contained. As it turns out not only can it be contained, but when the interests of the “conspiracy” participants are alligned, it can continue for decades. Naturally, the same applies for the pinnacle of the global wealth pyramid: the world’s billionaires and their plan of wealth preservation and accumulation.

Not only have the world’s richest been the biggest beneficiaries of the monetary and fiscal policies since 2009, with the current 2170 global billionaires representing a 60% increase since 2009 according to UBS, but their consolidated net worth has more than doubled from $3.1 trillion in 2009 to $6.5 trillion now. At the same time, the net worth of the “bottom 90%” of the world’s not so lucky population, has declined. Yet, somehow, the Fed is still revered.

Naturally, as in global financial conspiracies, the question arises: is it possible that instead of representing the interests of the general population, what the central banks simply do is follow the instructions of a far smaller cabal, that of the world’s uber wealthy?

In case there is any confusion, the above is a rhetorical question. It goes without saying that what the world’s largest wealth accumulators want above all else, is to preserve a status quo that allows their capital-based wealth to increase as fast and as much as possible in a regime of reflating asset prices, while keeping the bulk of the world’s population distracted, entertained, and collecting their daily welfare check.

Consider the downside: according to a new report by Wealth-X and UBS, “the average billionaire is incredibly well connected, with a social circle worth US$15 billion – five times the net worth of the average billionaire. This figure is based on a calculation of the net worth of only the three top connections of billionaires, and so it is likely to be even higher when considering the number of UHNW individuals the average billionaire interacts with while attending various meetings, dinners, and events.” It is during these “meetings, dinners and events” that the real policy defining the future of the world is set – far beyond the theater of a corrupt, dysfunctional Congress or incompetent Executive. And the policy is simple – “more for us, nothing for everyone else.”

The bottom line from Weatlh X: “factoring in all of the connections between the world’s billionaires, this equates to a total social circle worth a combined US$33 trillion” or double the GDP of the US.

The estimated “circle of influence” among the friends of just the US’ richest is shown below. 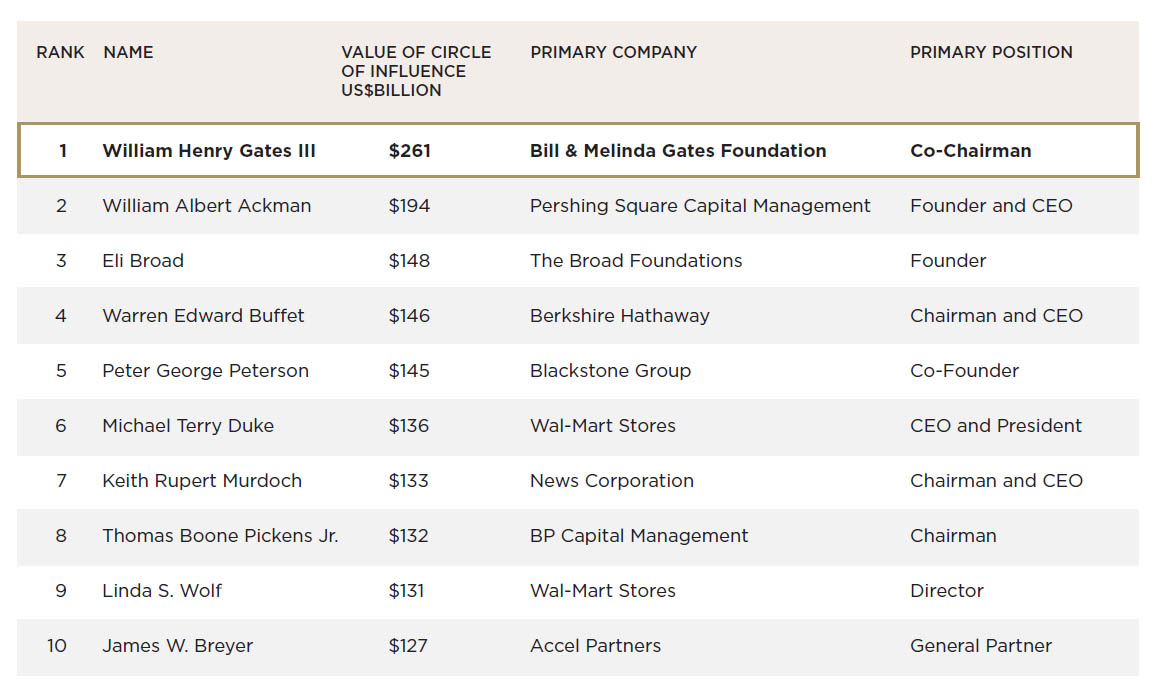 1 thought on “The World’s 2170 Billionaires Control $33 TRILLION In Net Worth, Double The US GDP”