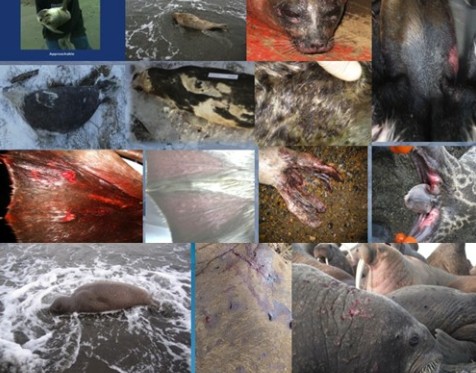 – Researchers: Skin ulcers on Alaska wildlife after Fukushima were never observed before — Also reported in seals from Japan — We couldn’t document fallout pattern when plumes hit and animals were on the ice (AUDIO) (ENENews, Nov 16, 2013):

Doug Dasher, University of Alaska Fairbanks, Nov. 6, 2013 (at 10:00 in): We also worked with the North Slope Borough on the Unusual Mortality Event with the ringed seals. […] We didn’t see any radiation levels in the seal tissues that would indicate levels of radiation that should have caused the lesions and illnesses that they saw on the seals, but we couldn’t document what the fallout pattern would have been at this time the seals were on the ice when the Fukushima plumes were passing that area. Nor to my knowledge has there been any definitive virus or otherwise defined as to what exactly affected the seals at that time.

Listen to the full briefing here

The 2011 Alaska Northern Pinniped Unusual Mortality Event, 2012: Ulcerative dermatitis is an emerging disease of unknown etiology in ice seals, not observed prior to 2011. Reports of a similar condition in ringed seals have come from Chukotka (Russia), NWT Canada, and northern Japan.

Bering Strait: Ice seal UME, 2012: When this occurred people were describing the seals as without new hair and tired. […] You can see the little orange bumps which have never been previously reported in seals. The red raised bumps were reported through November. […] So you can see the bumps that are also on seal flippers […] red and white sores that hunters have been reporting. […] Other things that people have reported are that they can hear the seal breathing and rasping breath. Seal may be breathing very hard. Also that the seals are making shorter dive duration. The lungs may be congested. There were about twenty seal carcasses sent to specialists […] Animals were choosing to be on shore, rather than in the water. Also an odd smell during butchering. […] Also testing for other possible environmental causes including […] radiation. This has been a big scare because of the power plant disaster in Japan and other sources of radiation in the environment. NSB [North Slope Borough] have pushed to have testing done. All of the seals sampled are being tested at UAF for radiation.