– Is NYPD Police Commissioner Ray Kelly is About to Take a Job at JP Morgan? (Liberty Blitzkrieg, Nov 6, 2013):

Thought the revolving door couldn’t get any worse? Think again. The Banana Republicization of these United States is now traveling at hyperloop speed. It’s one thing for folks at the SEC and Congress to jump ship for Wall Street, but the head of the country’s largest police force going to JP Morgan? This is particularly timely since it was just yesterday that I published an article titled: How the NYPD is in Bed with JP Morgan. 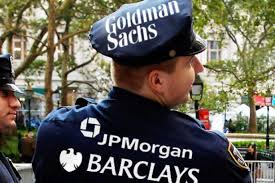 If this is true, what an incredible slap in the face to all New Yorkers. If you don’t get that you live in neo-feudalism by now, you never will.

Police Commissioner Ray Kelly is in advanced talks to take the top security job at JPMorgan Chase Inc. – and he may leave his current post before Bill De Blasio is sworn in, The Post has learned.

Kelly’s potential position with JPMorgan Chase would make him responsible for security at the giant financial firm, with emphasis on cyber-security, people familiar with the ongoing talks said.

Kelly’s new job could come with a seven-figure package of salary and bonuses.

NYPD spokesman John McCarthy would only say, “the story is false.”

Still confused about who runs this country? Enjoy your indentured servitude.