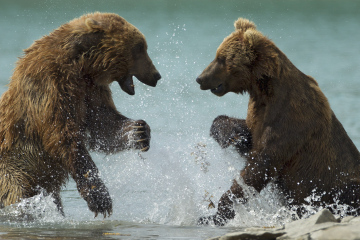 Could this man be any more impressive?

In the battle of man vs. bear, man has triumphed–well, sort of.

The Guardian reports that Yusuf Alchagirov, an 80-year-old Russian shepherd, was minding his own business in a raspberry field when he was attacked by a large, hungry bear. Rather than let the predator get the best of him, Alchagirov counter-attacked. Despite his age, the octogenarian managed to knock the bear off-balance with a flurry of kicks and headbutts.

Unfortunately, this beating failed to faze the furry attacker and the bear responded by knocking the shepherd off a nearby cliff.  According to the Guardian, Alchagirov was hospitalised with “bruises, bite wounds and four broken ribs,” but avoided a potentially lethal mauling.

Alchagirov may have survived his encounter, but experts  generally advise against fighting back during a bear attack. If you are approached aggressively by a brown bear — a common species of bear in the region — Mother Nature Network suggests playing dead as the bear is  ”likely trying to neutralize you as a threat.”

However, Alchagirov is positive that it’s his aggressiveness that saved his life. ”I got off easy. It would have killed me if I’d chickened out,” said the shepherd.