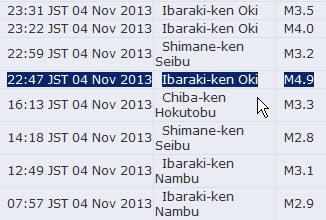 The Japan Times, Nov 4, 2013: Tepco to conduct fuel removal test at reactor 4 […] Tokyo Electric Power Co. will conduct a fuel removal test at the No. 4 reactor building of the stricken Fukushima No. 1 power plant, delaying the start of the actual operation by up to two weeks, sources close to the matter said Monday. […] The test was requested by the Japan Nuclear Energy Safety Organization. […] It has also urged Tepco to have its work evaluated by a group of Japanese and overseas experts formed by the International Research Institute for Nuclear Decommissioning, a Tokyo-based organization founded by Japanese government agencies, nuclear facility manufacturers and electric power companies.

Kyodo News, Nov. 4, 2013: TEPCO to conduct test for Fukushima No. 4 unit fuel removal […] The operator of the plant, crippled in the March 2011 quake and tsunami disaster, planned to start removing nuclear fuel from a cooling pool at the reactor building as early as next Friday. The decision comes after a government-affiliated nuclear safety agency called for an initial test operation, including transporting a protective fuel cask from the storage pool to another pool in a different building about 100 meters away for more stable conditions for cooling spent fuel, the sources said. The administrative agency, the Japan Nuclear Energy Safety Organization, has already inspected equipment to be used in the fuel removal work […]