It is crucial for the White House that the Healthcare.gov website continue to fail, because once the site actually starts functioning, Americans are going to be hit with such devastating rate shock that the Obama administration may never recover.

Obamacare is named the “Affordable Care Act,” after all, and the President promised the rates would be “as low as a phone bill.” But I just received a confirmed letter from a friend in Texas showing a 539% rate increase on an existing policy that’s been in good standing for years.

As the letter reveals (see below), the cost for this couple’s policy under Humana is increasing from $212.10 per month to $1,356.60 per month. This is for a couple in good health whose combined income is less than $70K — a middle-class family, in other words.

To clarify: this increased rate policy is not “under” Healthcare.gov, but the 539% rate increase is being caused because of Obamacare’s new rules and requirements. If Obamacare hadn’t become law, this couple could have continued spending $212 per month. Instead, they’re now going to have to spend $1,356 per month or sign up for Obamacare and hope to get a better rate there (if the website even functions long enough to enroll).

Here’s a scan of the actual letter: 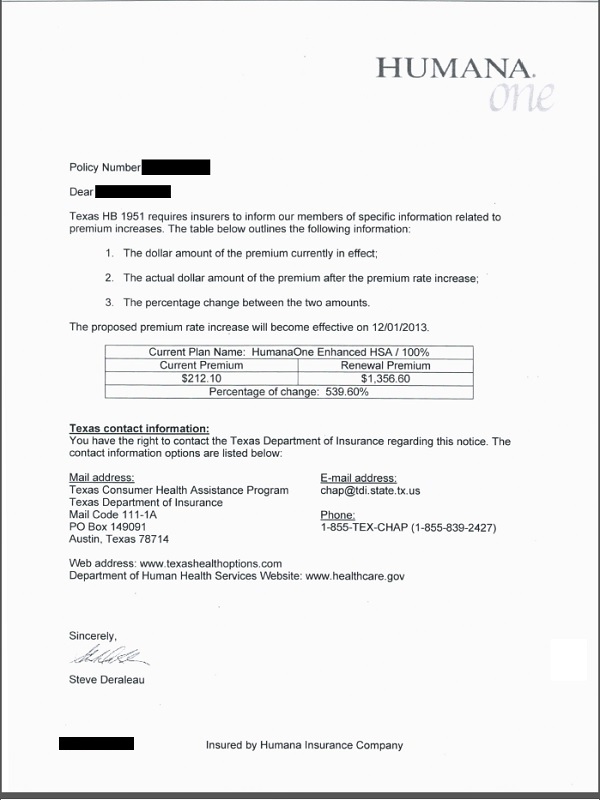 Millions are losing health care coverage thanks to Obamacare

All across America, people are getting hit with letters like these. Some letters inform you that you’ll have to pay double, triple or quadruple the current rates; other letters tell you your coverage is being dropped completely. According to one health policy expert, 16 million Americans will lose their health insurance due to Obamacare.

Also, according to NBC News, Obama knew well in advance that millions of Americans would lose their insurance. This didn’t stop him from lying to the public, however, and claiming, “You can keep your current insurance” if you like it.

Everything about Obamacare has been a blatant lie, it seems: the Affordable Care Act is not affordable; you can’t necessarily keep your doctor; and you can’t even shop for policies because the Healthcare.gov website continues to crash worse than a low-budget carnival ride.

It’s so bad that even Saturday Night Live, which practically functions as the comedy mouthpiece for the Democratic party, tore into the fiasco with a blistering comedy skit that paints HHS secretary Kathleen Sebelius as a delusional, out-of-touch Obamacare apologist. Watch it at:

In the parody video, Sebelius says:

“If our site keeps freezing, we’ve also provided helpful links to other websites such as Kayak.com, where you can purchase airline tickets to Canada, where you can buy cheaper prescription drugs.”

Obamacare has five critical, show-stopper problems, each of which could independently bring down the whole system

Problem #2) RATE SHOCK as Americans realize they are going to have to pay up to 539% more just to keep their current health insurance plans.

Problem #4) Critical failures communicating insurance status to doctors, hospitals and health service providers (this hasn’t even been tested, and once it is initiated, it will crash hard).

Bottom line: Obamacare is an economic apocalypse for America

Beyond the lies and campaign promises, the real ramifications of Obamacare are:

• Widespread job losses as employers cut hours and fire workers they can no longer afford to keep on the payroll thanks to Obamacare.

• Insane rate increases under a monopoly system that forces Americans to pay exorbitant fees to a cabal of insurance companies and drug companies.

• The widespread medical bankruptcy of American workers, families and employers.

This is all by design, and it was all made possible by the people who got suckered into voting for a President who deliberately seeks to utterly destroy America. 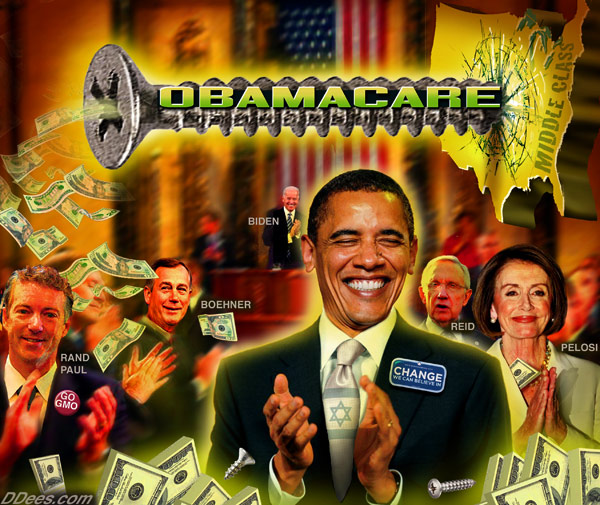