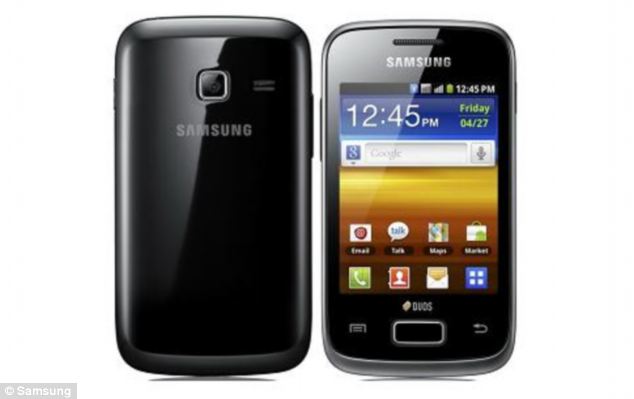 The ‘reviewers’ did not reveal who they actually were, meaning that the public were being fooled into thinking that they were reading honest appraisements.

The fine marks a new low in the bitter battle for the mobile phone market that is being fought by Samsung, Apple, Google and HTC.

Sun Lih-chyun, a spokesman for the Taiwan Federal Trade Commission, branded Samsung ‘deceitful’ for what it did.

He said: ‘This is the first case of its kind in Taiwan that a company has concealed its genuine status while attacking a rival.

‘The behaviour has negative impacts on market order and violated the fair trade law.’

The fake reviews related to an advert about the camera functions on Samsung’s Galaxy Y Duos GT-S6102, one of its flagship products.

The Taiwan FTC said its activities were designed to ‘highlight the shortcomings of competing products’ and that it was responsible for the ‘disinfection of negative news about Samsung products’.

HTC was described as ‘the victim of a campaign of defamation’.

Posting fake reviews online is known in the mobile industry as ‘astroturfing’. In addition to Samsung, two marketing firms in Taiwan were fined a combined total of $100,000

In addition to Samsung, two marketing firms in Taiwan were fined a combined total of $100,000.

According to research firm IDC, last year Samsung held a 30.3 percent share of the global smartphone market whilst Apple had 19.1 percent and HTC had 4.6 percent.

Samsung has run into a series of legal troubles, not least with Apple which won a $1bn patent dispute with it in a California court when a judge ruled it had ripped off its designs.

Both sides have used ripe language to accuse the other of theft with Apple alleging that Samsung ‘flagrantly copied’ its products.

British, Dutch and German courts have disagreed with the verdict and ruled that Samsung products are sufficiently different from those made by Apple.

For its part Samsung has alleged that Apple has stolen data management and mobile communication technology from its designs.

Samsung said: ‘We are disappointed that the Taiwan FTC has decided that we have violated the Fair Trade Act based on online marketing activities.

‘Samsung Electronics Taiwan is carefully reviewing the decision and will take all necessary steps to protect our reputation as a company which values its customers.’