Because according to a just conducted analysis by NerdWallet, looking at the future of the average recent college graduate, and more importantly looking at the mountain of student loans each graduate will be saddled with and the implications for the earliest possible retirement age onset, Millennials may well have no choice but to postpone their retirement by about a decade, to the ripe old age of 73.

The reason for this, of course, is the magic of compounded interest: that “manageable” debt load grows and grows and grows even assuming one dutifully pays interest on time. And with unemployment at graduation running at 18%, that is a rather generous scenario. Still, even under base case assumption, the median student loan of $23,300 will end up costing students over $115K by the time they retire.

What does that mean in practical terms? “When will students be able to retire given that many are spending the first ten years (or more) of their careers paying off their hefty loans? NerdWallet… found that while retirement is certainly not impossible, for most it will have to wait until their early to mid 70s— over 10 years later than the current average retirement age of 61.” It goes without saying that all else is assumed equal. Alas, in the America’s welfare state future, few things will be equal, and most things will be far worse.

Which, one wonders, may be the secret plan after all: since by now everyone knows that the US’ welfare state is unsustainable for the mid- and certainly long-term future, what better way to avoid draining it, than to force those who would otherwise benefit into at least ten more years of work to pay off debts accumulated over 50 years earlier.

Quite a brilliant strategy when one thinks about it. And to think, all that was required was record low interest rates, fooling everyone into believing all those tens of thousands of dollars of debt, was cheap.

With the total amount of outstanding student debt approaching $1 trillion, the plight of debt-straddled college students is more important than ever. In the past 30 years, not only has the number of high school graduates enrolled in four-year universities increased by 11%, but college tuition has also soared over 200%. As more students attend college at a cost higher than ever before, Millennials have increasingly turned to loans to help finance their education. While much of the college debt dialogue is over immediate issues like employment and repayment, there is another glaring challenge that graduates will have to deal with for years to come: retirement.

When will students be able to retire given that many are spending the first ten years (or more) of their careers paying off their hefty loans? NerdWallet conducted a study that examined the financial profile of a typical college graduate and found that while retirement is certainly not impossible, for most it will have to wait until their early to mid 70s— over 10 years later than the current average retirement age of 61.

Quick Facts On Students And Their Debt

Here are some quick facts to give context on exactly what students are grappling with:

Clearly, student debt has an impact on retirement outcomes. Currently, the average retirement age is 61. But for most of today’s college grads, the realistic retirement age will be closer to their mid-70s. Given an average life expectancy of 84, this will leave only 10-12 years for people to spend in retirement. The main reason for this is that although the median college graduate leaves with a seemingly manageable $23,300 debt load, 7% of a student’s earnings go toward yearly loan payments of $2,858 for the first ten years of his or her career. This prevents any meaningful contributions toward retirement. In fact, by the age of 33, when the typical college grad has finally paid off their standard 10-year loans, he or she can only be expected to have saved $2,466 for retirement—over $30,000 less than if the student had graduated with no debt. Even worse, the foregone savings carry a serious opportunity cost, as this money would have been earning a compounded rate of return every year until retirement. At the projected retirement age of 73, the lost savings directly attributable to student debt is $115,096, nearly 28% of total retirement savings.

Surprisingly, for the struggling graduate, the retirement outcome isn’t dramatically different. Despite being in nearly twice as much debt and starting with 10% less pay, the expected retirement age is still just 75, only two years later than the median case. The main reason for this is social security. Much has been discussed about whether or not social security will be around by the time Millennials retire. To be conservative, social security benefits are factored into the study at $11,070 (75% of current average) per year beginning at age 67. That said, a substantial reduction in benefits or the disappearance of the program altogether would significantly alter the retirement equation. If the current social security payouts were to remain unchanged for the next 50 years, the benefits would provide future retirees a significant boost by covering nearly 15% of their required yearly income in retirement. 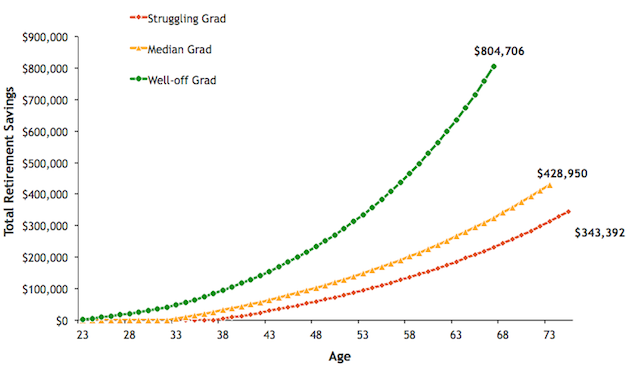 The retirement prospects for the well-off grad are significantly better than the others as illustrated in the graph above.  By graduating with a reduced debt load and landing a job that pays 22% more, the well-off grad can expect to retire at age 67. This is a huge departure from the other cases, and demonstrates the importance of contributing to a retirement plan early on in one’s career. Compared to the median grad, the extra $40,406 that the well-off graduate is able to contribute during the first ten years of his or her career results in a $446,452 difference in retirement savings by age 73.

So How Do You Beat The Odds?

Given these circumstances, should students resign themselves to an eternity of work with little to look forward to in their latter years? Not necessarily. Though an increasing retirement age does appear to be an inevitable economic reality, being conscious of this problem and tailoring financial and career planning accordingly can go a long way toward achieving retirement objectives. There are many factors that influence the ultimate age at which people are able to retire, but there are a few variables that have a particularly large impact. Making above-average yearly contributions to a retirement account, working for an organization with a decent 401(k) match, and making sure to invest money in index tracking mutual funds are three ways to help add years to retirement.

As fewer and fewer companies offer defined benefit plans, Millennials will have to depend upon employer 401(k) plans to save for retirement. According to a recent Fidelity survey, the current median yearly matching contribution is $3,420. As shown below, these employer contributions are expected to make up roughly 50% of the retirement equation for Millennials. By working for a company that offers a yearly matching contribution of $4,420 ($1,000 more than the median), potential retirees can reduce their expected retirement age by up to three years. 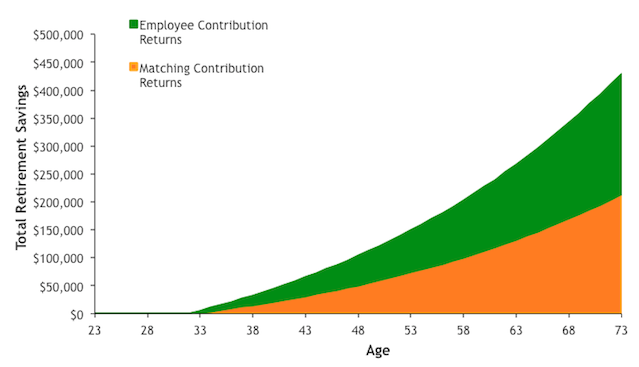 While working for a generous employer can do wonders for retirement, not everyone is in a position to be overly selective about whom to work for. Another important component of retirement planning is the yearly contribution rate. Making above-average contributions can significantly improve retirement outcomes. Though the study projects a 6% annual post-tax contribution (the average personal savings rate for Americans), increasing that number to 10% reduces the expected age of retirement from 73 to 69.

Contributing money towards retirement won’t be helpful if the money is simply left in a savings account or a CD. To earn a return, Millennials need to be willing to take some risk and construct an equity-oriented portfolio. This may be difficult for today’s grads who have seen the stock market seemingly implode every five years, but unfortunately, retirement will be impossible if people invest too conservatively. The study assumed a 6% yearly return on retirement savings which is a conservative figure given the historical performance of the market. That said, it is a rate of return that can’t be achieved by completely avoiding equity exposure. The best way for an individual to overcome this problem is by investing in index tracking mutual funds, which will offer a market return with low fees.

Retirement Isn’t Hopeless, But It Will Be Difficult

Far more than their parents, Millennials will have to rely upon proactive financial management to achieve their retirement goals. Each generation is afflicted with distinctive financial ills, but the challenge of college debt is unique to Millennials. The decline of pension plans, the uncertainty surrounding social security and the college debt epidemic have placed the onus on graduates to make conscious, forward-thinking decisions about their retirement.

All projected figures are inflation adjusted and discounted back to 2013 dollar-terms.