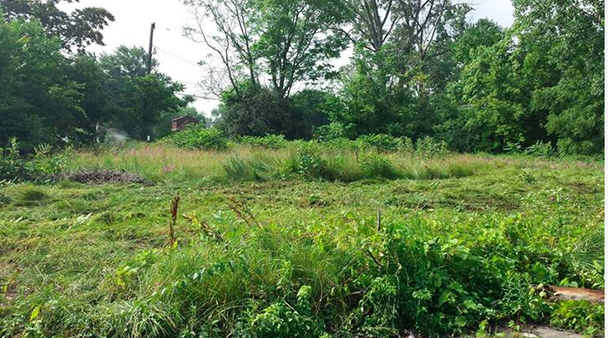 After nearly five years of planning, a large-scale attempt to turn a big chunk of Detroit into an urban forest is now underway. The purchase of more than 1,500 vacant city-owned lots on the city’s lower east side – a total of more than 140 acres – got final approval from Detroit Emergency Manager Kevyn Orr and Michigan Governor Rick Snyder last week.

The buyer is Hantz Farms, and it’s a venture of financier John Hantz, who lives in the nearby Indian Village neighborhood. Indian Village is an affluent enclave of manor-scale historic homes, but much of the surrounding area is blighted. Hantz Farms will pay more than $500,000 for the land, which consists of non-contiguous parcels in an area where occupied homes are increasingly surrounding by abandoned properties.

The company has committed to clearing 50 derelict structures, cleaning up the garbage dumped across the neighborhood, planting 15,000 trees, and mowing regularly. Planting of the hardwoods will begin in earnest next fall, and the urban forest will be called Hantz Woodlands.

The huge deal drew criticism last year, when the city council – which was then still in control of Detroit – voted 5-4 to approve the sale. A coalition of grassroots urban farmers and community activists opposed it, charging that it was a play to increase land values by buying a huge swath of acreage and taking it off the market. “I think it opens the gateway for other rich folks to come here to buy up land and essentially make themselves rich compounds,” urban gardener Kate Devlin told The Huffington Post at the time.

John Hantz agrees. But he thinks that’s a good thing. As he told The Atlantic back in 2010:

[T]here’s no reason to buy real estate in Detroit—every year, it just gets cheaper. We’ve gone from 2 million people to 800,000. There are over 200,000 abandoned parcels of land and—by debatable estimates—30,000 acres of abandoned property. We need to create scarcity, because until we get a stabilized market, there’s no reason for entrepreneurs or other people to start buying. I thought, What could do that in a positive way? What’s a development that people would want to be associated with? And that’s when I came up with a farm.

And officials from Hantz Farms argue the city will benefit in other ways as well. As soon as the sale is final, probably some time in the next week or two, Hantz Farms will begin paying property taxes on land that has been off the revenue rolls for years, says Hantz Farms President Mike Score. He also points out that most of the lots have been up for auction at least twice without attracting interest, and that residents of the area were offered the right of first refusal to buy plots adjacent to their homes.

Conditions in the neighborhood, Score says, have been dire, with overgrown sidewalks, piles of refuse, feral dogs, and no streetlights. “Most of the sidewalks aren’t fit to walk on,” he says. “I’ve actually physically cried before, going to work in the dark, seeing mothers walking their kids to school through unmanaged brush and shoulder-high weeds. To go in there and take away most of the danger from the landscape is so satisfying.”

“The purpose of the investment is to make the neighborhood more livable and then recover our investment over time.”

Score adds that Hantz Farms has already begun mowing about half the property and cleaning up years of trash. And the response his team has gotten from local residents, he says, has been positive. “We’re out every day, and we have yet to meet the first angry neighbor,” he says.

He tells a story about a group of residents who asked his mowers to clear a sidewalk so kids could walk safely. After the grass was mowed, Score says, people came out to rake and sweep the clippings aside. Not long after, he noticed a family putting a new roof on a nearby home that he had thought might be destined for abandonment. “That’s the kind of effect we want to see,” he says.

Score says that the first phase of planting will be hardwood trees such as maple and oak, planted in straight rows. The Hantz properties will not be fenced, and streets will remain open for passage. After the property is fully cleared, at a cost he estimates at more than $600,000, Score says the company will explore commercial options that might provide jobs for local residents such as orchards, maple syrup, and the cultivation of ornamental plants and shrubbery. For now, he says, his team is working on building trust with neighbors so that when it comes time to discuss subjects such as pesticide use, there’s already a relationship.

Score isn’t shy about emphasizing that this is not merely a philanthropic project. “This is designed to be a for-profit enterprise,” he says. “I can assure you we have a business plan and we don’t have any anxiety about achieving our goals. We’re entrepreneurs, and that’s really our problem to wrestle with. The purpose of the investment is to make the neighborhood more livable and then recover our investment over time, and we’re very confident we can do that.”

In the short term, Score says he thinks the Hantz project will quickly prove its value to Detroit residents.