Under the guidance of Jamie Dimon, adjudged by the mainstream media to be the greatest banker the world has ever  known (hyperbole accepted), a late night Friday phone call (we assume not a drunk-dial) between Attorney General Eric Holder and JPMorgan’s general counsel, confirms, according to the WSJ, that JPMorgan will settle their residential mortgage bond suits with the DoJ for $13 Billion – the biggest settelement ever for a single company. Bloomberg reports that an additional $2 billion was added during the negotiations last night. Who knows: perhaps Dimon feels the same about Holder as the rest of the population and made it quite clear, at a cost of another $2 billion.

The final wording of the deal is to be finalized but as part of the deal the DoJ expects JPM to cooperate with the continuing criminal probe of the bank’s RMBS issuance – which remain unresolved. The settlement is ‘unsurprisingly’ in line with JPM’s expected litigation expenses for Q2/Q3 13 but it would appear they expect worse to come still as the total litigation reserve was recently increased.

The settlement appears to right in the middle of the range…

Perhaps unsurprisingly in line (as seen below) with expectations for losses in Q2 and Q3 2013 (of $5.7 billion and $6.8 billion respectively) 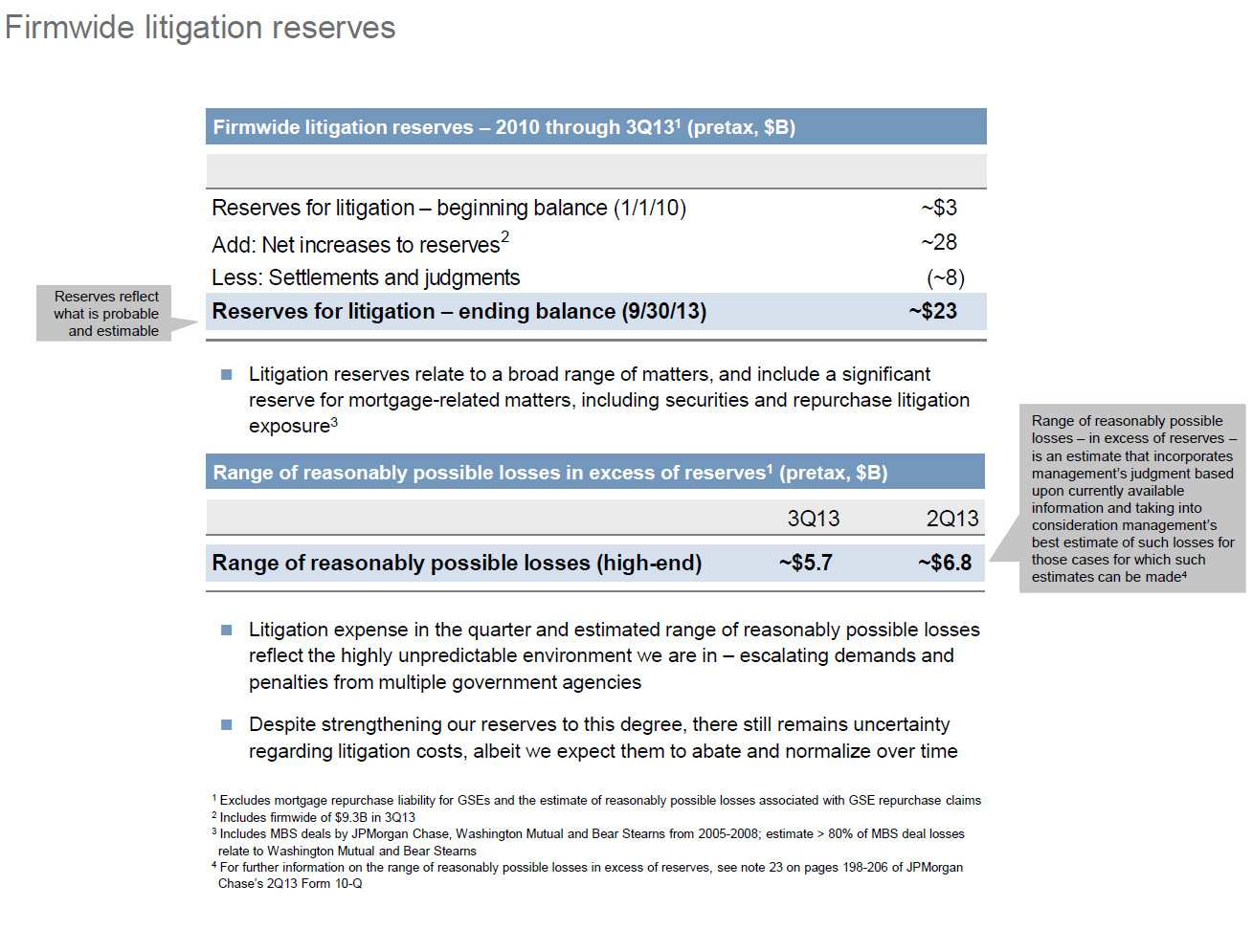 JPMorgan has reached a tentative $13 billion deal with the Justice Department to settle a number of outstanding investigations of its residential mortgage-backed securities business, according to a person familiar with the decision.

The general terms of the deal were struck Friday night in a phone conversation between Attorney General Eric Holder, his deputy Tony West, and the bank’s general counsel, Stephen Cutler, the person said.

The deal doesn’t resolve a continuing criminal probe of the bank’s conduct, which is being handled by federal prosecutors in Sacramento, Calif., the person said.

The deal does include a roughly $4 billion agreement with the Federal Housing Finance Agency to settle allegations that J.P. Morgan misled Fannie Mae and Freddie Mac about the quality of loans it sold them

As part of the deal, the Justice Department expects J.P. Morgan to cooperate with the continuing criminal probe of the bank’s issuance of mortgage-backed securities between 2005 and 2007, the person said.

So they have $23bn in total reserves outstanding… and they estimate $12.5bn in losses over reserves as of Q3 (see above).

Which makes a total of $35 billion potential legal charges.

So summing it all up…