– Forecast shows Fukushima to get eye wall of Typhoon Wipha — Weather Channel Expert: Things may be getting worse at plant; Storm surge to combine with inland flooding at site (VIDEO) (ENENews, Oct 15, 2013):

Wall St. Journal, Oct. 15, 2013 at 7:38p ET: Typhoon Wipha Batters Japan’s East Coast […] the strongest typhoon in a decade to affect the Kanto region […] Classified as a “large” typhoon on the agency’s storm scale […] Record precipitation of 122.5 millimeters per hour was registered on Izu Oshima Island, about 120 kilometers south of the capital in the Pacific, with total rainfall on the island in the last 24 hours surpassing 750 millimeters. […] Evacuation orders were issued to 8,840 residents in Kimitsu City, Chiba Prefecture, as a nearby river was feared to be on the verge of flooding.  […] Precautions were also taken at the crippled Fukushima Daiichi nuclear power plant, where workers have struggled to contain leaks of contaminated water. Equipment was bundled together […] Typhoon Wipha is the strongest storm to approach eastern Japan since October 2004. 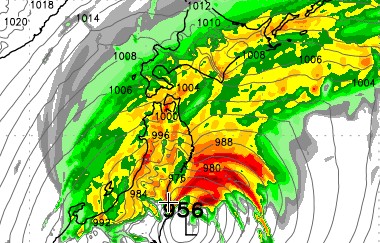 Carl Parker, The Weather Channel’s hurricane specialist, Oct. 15, 2013: There’s a very sensitive location just to the north of Tokyo. […] they’re still working very hard to contain the radiation. They don’t want it to get into the groundwater. If you add storm surge, there could be some significant storm surge, although the storm will be weakening at that time, along with inland flooding, because there’s going to be very heavy rain, then you’re going to be looking at the possibility of something getting worse there at the facility. So, hopefully that does not happen.

The Weather Channel, Oct. 15, 2013: There’s a possibility that the storm surge could affect [the Fukushima nuclear plant].