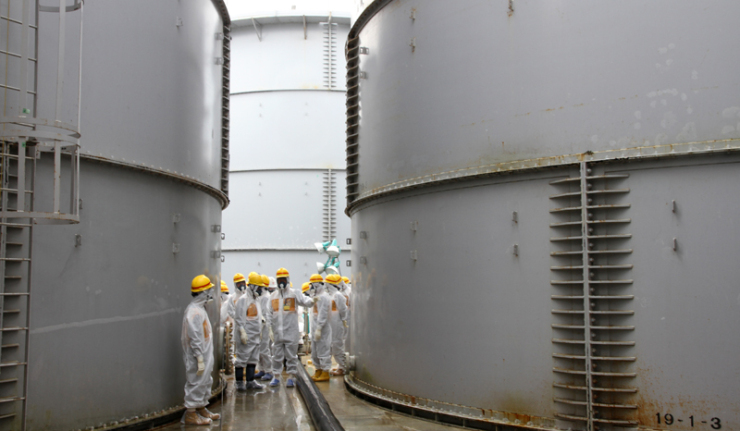 IAEA experts are trying on the ground to sort out work to do away with the aftermath of the Fukushima nuclear power plant accident. But the situation grows increasingly tense despite all efforts by the government.

Hundreds of tons of radioactive water leaked out of the reservoirs and reached the subterranean waters just days ago. It may have likewise leaked into the ocean, says an expert in nuclear physics and nuclear power generation, Igor Ostretsov, Doctor of Engineering.

“I am absolutely certain that the radioactive water leaks into the ocean have never stopped, because the plant molten corium is continuously cooled. The water used in the cooling is then stored in radioactive water storage tanks. A lot of radioactive water has been accumulated there to date. A lot of water is required for cooling. The tanks are actually non-durable and often overfilled, resulting in overflows. But this is not reported unless a pipe bursts”.

A state of emergency should now be declared throughout the world community. Japan needs international control, Tokyo can’t manage it on its own. Whatever the world nations can offer to cope with the situation should be used, or else the northern part of the Pacific will be contaminated. Discharging radioactive water into tanks and keeping them is pointless. Japan clearly needs an immediate extraordinary solution.

As of today, the radiation levels around the plant are so high that staying there for four hours would be lethal for a person. But the Japanese either failed or chose not to use the experience of Russian liquidators who tackled a similar situation at the Chernobyl nuclear power plant in 1986, says Professor of the Russian Academy of Natural Sciences, Vladimir Kuznetsov.

“Japan has been unsuccessfully trying to get the situation under control for more than two years now, under the supervision of the IAEA. But the situation is worsening by the week. Neither Japan, nor the International Atomic Energy Agency is capable of controlling the situation. The decisions made are known to be wrong. We had a concrete cover for the crippled Chernobyl reactor in six months after the accident, while in Japan they still have nothing now that two and a half years have passed since March 11th, 2011. Background radiation is 400 times the normal levels in towns just 10 kilometres away from the crippled nuclear plant”.

A complete removal of the plant equipment will take almost 50 years. How long the rehabilitation of radiation-affected residents of the area around the Fukushima plant may take is anyone’s guess. So far, the locals have been facing really grave problems, the vice president of the committee to restore the coastal area of the city of Shiogama, Miyagi Prefecture, Toru Yabe, said in an interview with the Voice of Russia.

“Restoration has been very slow. Many people have been living in temporary housing for 2.5 years now; they still have no homes of their own. They may just as well live there for 3 or even 4 years”, Toru Yabe said.

Dispelling the myth that building nuclear power plants in seismically active areas is safe has become an important lesson taught by the Fukushima disaster. It has been brought home to the Japanese for dozens of years that the situation is under control and they should have no fears. But it turned out that the elements are unpredictable and that humanity is defenceless against nature despite all of their technological progress.

In short, Professor Streltsov believes that Japan has entered the post-Fukushima period of development, one that will be qualitatively different in all parameters of social being. It would stand to reason to assume that the entire world has entered a new paradigm of development. And yet, there is no alternative to nuclear power production due to natural resource scarcity, ecological problems caused by hydrocarbon burning and the short payoff period of nuclear power-generating units.

Nuclear power plant accidents are, unfortunately, unavoidable. But proper use of technology, due regard for the international experience and close compliance with safety procedures can minimize the consequences and bring fresh hope to humanity.

1 thought on “Experts: Fukushima Radiation Worse Than Feared – ‘A State Of Emergency Should Now Be Declared Throughout The World Community’”