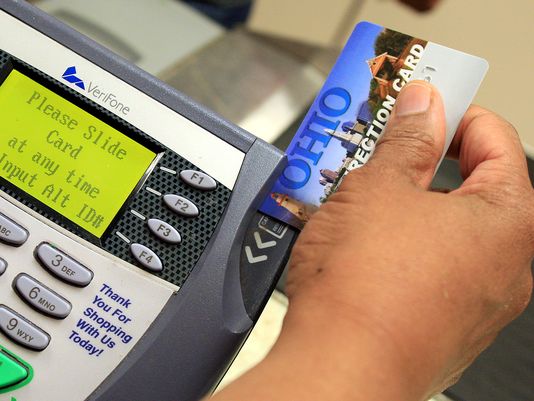 People in Ohio, Michigan and 15 other states found themselves unable to use their food stamp debit-style cards on Saturday, after a routine check by vendor Xerox Corp. resulted in a system failure.The electronic benefits system experienced a temporary shutdown during a routine test of Xerox back-up systems, company spokeswoman Jennifer Wasmer said Saturday.

“While the system is now up and running, beneficiaries in the 17 affected states continue to experience connectivity issues to access their benefits. Technical staff is addressing the issue and expect the system to be restored soon,” Wasmer said in an emailed statement. “Beneficiaries requiring access to their benefits can work with their local retailers who can activate an emergency voucher system where available. We appreciate our clients’ patience while we work through this outage as quickly as possible.”

U.S. Department of Agriculture spokeswoman Courtney Rowe underscored that the outage is not related to the government shutdown.

Shoppers left carts of groceries behind at a packed Market Basket grocery store in Biddeford, Maine, because they couldn’t get their benefits, said fellow shopper Barbara Colman, of Saco, Maine. The manager put up a sign saying the EBT system was not in use. Colman, who receives the benefits, called an 800 telephone line for the program and it said the system was down due to maintenance, she said.

“That’s a problem. There’s a lot of families who are not going to be able to feed children because the system is being maintenanced,” Colman said. “No one should put maintenance in during the daytime.”

She planned to reach out to local officials.

“I’m trying to reach out to everybody because I’m not thinking of me an adult who can figure out things. I’m thinking of the simpler person in the world who is sitting there trying to just do basic shopping to feed their kids. You don’t want children going hungry tonight because of stupidity,” she said.

Colman said the store manager promised her that he would honor the day’s store flyer discounts next week.

Ohio’s cash and food assistance card payment systems went down at 11 a.m., said Benjamin Johnson, a spokesman for the Ohio Department of Job and Family Services. Ohio’s cash system has been fixed, however he said that its electronic benefits transfer card system is still down. Johnson said Xerox is notifying retailers to revert to the manual system, meaning SNAP customers can spend up to $50 until the system is back online. SNAP recipients should call the 800 number on the back of their card, and Xerox will guide them through the purchase process.

Illinois residents began reporting problems with their cards — known as LINK in that state — on Saturday morning, said Januari Smith, spokeswoman for the Illinois Department of Human Services.

Smith said that typically when the cards aren’t working retailers can call a backup phone number to find out how much money a customer has available in their account. But that information also was unavailable because of the outage, so customers weren’t able to use their cards.

“It really is a bad situation but they are working to get it fixed as soon as possible,” Smith said. “We hope it will be back up later today.”

In Clarksdale, Miss. — one of the poorest parts of one of the poorest states in the nation — cashier Eliza Shook said dozens of customers at Corner Grocery had to put back groceries when the cards failed Saturday because they couldn’t afford to pay for the food. After several hours, she put a sign on the front door to tell people about the problem.

“It’s been terrible,” Shook said in a phone interview. “It’s just been some angry folks. That’s what a lot of folks depend on.”

Mississippi Department of Human Services director Rickey Berry confirmed that Xerox, the state’s EBT vendor, had computer problems. He said he had been told by midafternoon that the problems were being fixed.

“I know there are a lot of mad people,” Berry said.

Sheree Powell, a spokeswoman for the Oklahoma Department of Human Services, started receiving calls around 11:30 a.m. about problems with the state’s card systems. More than 600,000 Oklahomans receive SNAP benefits, and money is dispersed to the cards on the first, fifth and 10th days of every month, so the disruption came at what is typically a high-use time for the cards.

Oklahoma also runs a separate debit card system for other state benefits like unemployment payments. Those cards can be used at ATMs to withdraw cash. Powell said Xerox administers both the EBT and debit card systems, and they both were down initially.

Like Ohio’s Johnson, Powell said that Oklahoma’s cash debit card system has since been restored, but the EBT cards for the SNAP program were still down. Powell said Oklahoma’s Xerox representative told them that the problems stemmed from a power failure at a data center, and power had been restored quickly.

“It just takes a while to reboot these systems,” she said, adding that she did not know where the data center was located.

Powell said that some grocery store cashiers had been speculating that the federal government’s shutdown caused the problem, but state officials have been assured that that is not the case.

“We are hopeful it will be up this afternoon but we were not given a specific time frame,” she said.

David Akerly, a spokesman for Michigan’s Department of Human Services, also confirmed that residents in his state have reported problems using their cards.