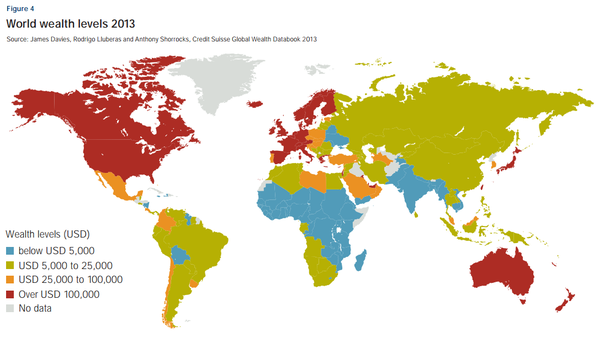 Global wealth levels have set records, but in Russia, the explosion in wealth has given way to the highest income inequality level, a new report showed.

In Russia, just 110 people own 35% of the country’s wealth, according to a report released Wednesday by Credit Suisse.

The country (population 139 million) has the highest wealth inequality in the world, save for a few Caribbean islands, the report said.

Credit Suisse’s annual Global Wealth Report also found that since 2000, household wealth around the world has more than doubled, reaching a high of $241 trillion. Strong economic growth and rising population levels in the last 13 years are major reasons for the trend. Average wealth per adult is now at $51,600.

The richest countries include Switzerland, Australia, Luxembourg and the United States.

In the U.S., wealth levels have fully recovered, the report said. Americans account for 42% of the world’s billionaires.