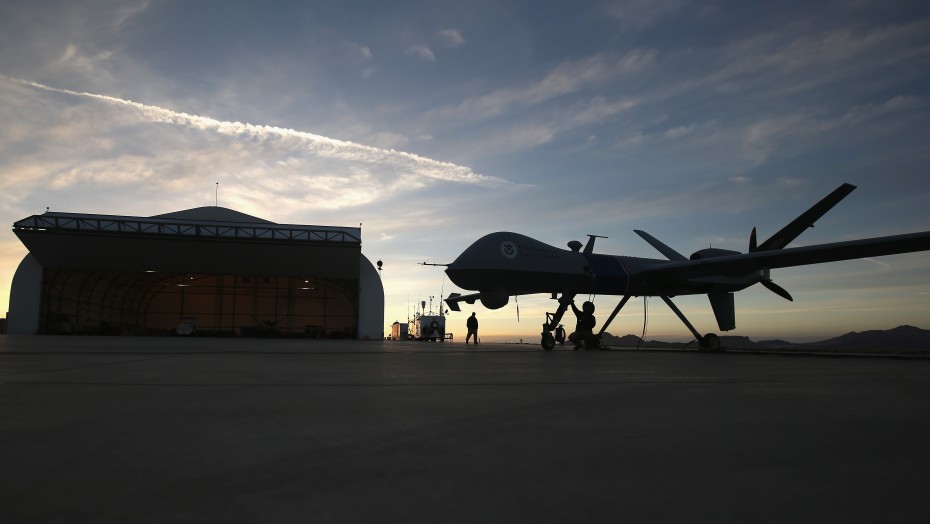 Maintenence personel check a Predator drone operated by U.S. Office of Air and Marine (OAM), before its surveillance flight near the Mexican border on March 7, 2013 from Fort Huachuca in Sierra Vista, Arizona

– Soon, Drones May Be Able to Make Lethal Decisions on Their Own (National Journal, Oct 8, 2013):

Scientists, engineers and policymakers are all figuring out ways drones can be used better and more smartly, more precise and less damaging to civilians, with longer range and better staying power. One method under development is by increasing autonomy on the drone itself.

Eventually, drones may have the technical ability to make even lethal decisions autonomously: to respond to a programmed set of inputs, select a target and fire their weapons without a human reviewing or checking the result. Yet the idea of the U.S. military deploying a lethal autonomous robot, or LAR, is sparking controversy. Though autonomy might address some of the current downsides of how drones are used, they introduce new downsides policymakers are only just learning to grapple with.

The basic conceit behind a LAR is that it can outperform and outthink a human operator. “If a drone’s system is sophisticated enough, it could be less emotional, more selective and able to provide force in a way that achieves a tactical objective with the least harm,” said Purdue University Professor Samuel Liles. “A lethal autonomous robot can aim better, target better, select better, and in general be a better asset with the linked ISR [intelligence, surveillance, and reconnaissance] packages it can run.”

Though the pace for drone strikes has slowed down — only 21 have struck Pakistan in 2013, versus 122 in 2010 according to the New America Foundation — unmanned vehicles remain a staple of the American counterinsurgency toolkit. But drones have built-in vulnerabilities that military planners still have not yet grappled with. Last year, for example, an aerospace engineer told the House Homeland Security Committee that with some inexpensive equipment he could hack into a drone and hijack it to perform some rogue purpose.

Drones have been hackable for years. In 2009, defense officials told reporters that Iranian-backed militias used $26 of off-the-shelf software to intercept the video feeds of drones flying over Iraq. And in 2011, it was reported that a virus had infected some drone control systems at Creech Air Force Base in Nevada, leading to security concerns about the security of unmanned aircraft.

It may be that the only way to make a drone truly secure is to allow it to make its own decisions without a human controller: if it receives no outside commands, then it cannot be hacked (at least as easily). And that’s where LARs, might be the most attractive.

Though they do not yet exist, and are not possible with current technology, LARs are the subject of fierce debate in academia, the military and policy circles. Still, many treat their development as inevitability. But how practical would LARs be on the battlefield?

Heather Roff, a visiting professor at the University of Denver, said many conflicts, such as the civil war in Syria, are too complex for LARs. “It’s one thing to use them in a conventional conflict,” where large militaries fight away from cities, “but we tend to fight asymmetric battles. And interventions are only military campaigns — the civilian effects matter.”

Roff says that because LARs are not sophisticated enough to meaningfully distinguish between civilians and militants in a complex, urban environment, they probably would not be effective at achieving a constructive military end– if only because of how a civilian population would likely react to self-governing machines firing weapons at their city. “The idea that you could solve that crisis with a robotic weapon is naïve and dangerous,” she said.

Any autonomous weapons system is unlikely to be used by the military, except in extraordinary circumstances, argued Will McCants, a fellow at the Brookings Saban Center and director of its project on U.S. Relations with the Islamic World. “You could imagine a scenario,” he says, “in which LAR planes hunted surface-to-air missiles as part of a campaign to destroy Syria’s air defenses.” It would remove the risk to U.S. pilots while exclusively targeting war equipment that has no civilian purpose.

But such a campaign is unlikely to ever happen. “Ultimately, the national security staff,” he said, referring to personnel that make up the officials and advisers of the National Security Council, “does not want to give up control of the conflict.” The politics of the decision to deploy any kind of autonomous weaponry matters as much as the capability of the technology itself. “With an autonomous system, the consequences of failure are worse in the public’s mind. There’s something about human error that makes people more comfortable with collateral damage if a person does it,” McCants said.

That’s not to say anyone is truly comfortable with collateral damage. “They’d rather own these kinds of decisions themselves and be able to chalk it up to human error,” McCants said. Political issues aside, B.J. Strawser, assistant professor at the Naval Postgraduate School, says that LARs simply could not be used effectively in a place like Syria. “You’d need exceedingly careful and restrictive ROEs [rules of engagement], and I worry that anyone could carry that out effective, autonomous weapon or not,” he said.

“I don’t think any actor, human or not, is capable of carrying out the refined, precise ROEs that would enable an armed intervention to be helpful in Syria.”

1 thought on “Soon, Drones May Be Able To Make Lethal Decisions On Their Own”