Tepco’s video tour of Fukushima Daiichi nuclear power plant, Sept. 2013 (At 1:00 in) – The power line tower of units 5 & 6 fell over due to a collapse of the embankment. Consequently, the whole site lost its outside power source. 20-minute video here 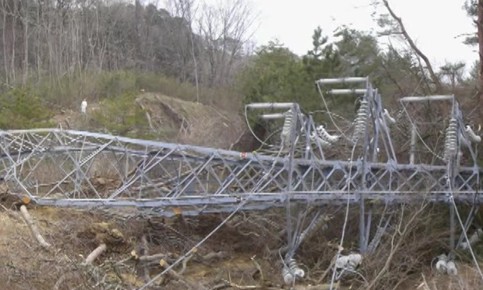 WERU’s News Report interviews Dean Wilkie, nuclear reactor operations at a U.S. Department of Energy test reactor in Idaho (At 28:50 in) – When the accident happened back in March 2011 there was a power pole, one of these huge power poles, inside of the Daiichi facility, inside the area there, and the ground that it was set on became super-saturated with water and they had a mud slide and that whole tower went down […] At Fukushima now, what we’re seeing, all of this work that they’ve been doing with these walls and then it’s causing the water to back up, it’s starting to saturate soil that’s underneath the buildings and in adjacent areas around the buildings. Couple that with the fact that there are known fractures in that soil — it was very obvious during the earthquake.  Full broadcast here

Nuclear Expert Gordon Edwards interview on the Green Power Wellness Show (At 32:00 in) – The worry with Unit No. 4, even though there was no fuel in the core of the reactor, there’s a spent fuel pool very precariously perched up above 5 floors. If the plant were to collapse — which it’s been showing signs of doing — then that fuel would be all over the place and it would be impossible to cool. And that would be a real… you could get far greater emissions than we did initially. Full interview here

– Tokyo Professor: Japan Is On Verge Of Collapse – Osaka Professor: If You Don’t Take Action Right Now, You Have No Future

And here is what … “you could get far greater emissions than we did initially” … really means:

A collapse of Fukushima reactor no. 4 SFP would mean the end of humanity as we know it.