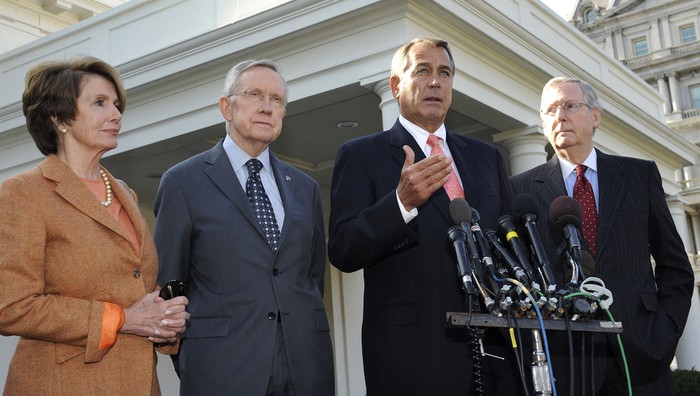 A majority of U.S. citizens believe congressional leaders in both the House and Senate must be sent to war-torn Syria immediately.

– Poll: Majority Of Americans Approve Of Sending Congress To Syria (The Onion, Sep 5, 2013)

WASHINGTON—As President Obama continues to push for a plan of limited military intervention in Syria, a new poll of Americans has found that though the nation remains wary over the prospect of becoming involved in another Middle Eastern war, the vast majority of U.S. citizens strongly approve of sending Congress to Syria.

The New York Times/CBS News poll showed that though just 1 in 4 Americans believe that the United States has a responsibility to intervene in the Syrian conflict, more than 90 percent of the public is convinced that putting all 535 representatives of the United States Congress on the ground in Syria—including Senate pro tempore Patrick Leahy, House Speaker John Boehner, House Majority Leader Eric Cantor, and House Minority Leader Nancy Pelosi, and, in fact, all current members of the House and Senate—is the best course of action at this time.

“I believe it is in the best interest of the United States, and the global community as a whole, to move forward with the deployment of all U.S. congressional leaders to Syria immediately,” respondent Carol Abare, 50, said in the nationwide telephone survey, echoing the thoughts of an estimated 9 in 10 Americans who said they “strongly support” any plan of action that involves putting the U.S. House and Senate on the ground in the war-torn Middle Eastern state. “With violence intensifying every day, now is absolutely the right moment—the perfect moment, really—for the United States to send our legislators to the region.”

“In fact, my preference would have been for Congress to be deployed months ago,” she added.

Citing overwhelming support from the international community—including that of the Arab League, Turkey, and France, as well as Great Britain, Iraq, Iran, Russia, Japan, Mexico, China, and Canada, all of whom are reported to be unilaterally in favor of sending the U.S. Congress to Syria—the majority of survey respondents said they believe the United States should refocus its entire approach to Syria’s civil war on the ground deployment of U.S. senators and representatives, regardless of whether the Assad regime used chemical weapons or not.

In fact, 91 percent of those surveyed agreed that the active use of sarin gas attacks by the Syrian government would, if anything, only increase poll respondents’ desire to send Congress to Syria.

Public opinion was essentially unchanged when survey respondents were asked about a broader range of attacks, with more than 79 percent of Americans saying they would strongly support sending Congress to Syria in cases of bomb and missile attacks, 78 percent supporting intervention in cases of kidnappings and executions, and 75 percent saying representatives should be deployed in cases where government forces were found to have used torture.

When asked if they believe that Sen. Rand Paul should be deployed to Syria, 100 percent of respondents said yes.

“There’s no doubt in my mind that sending Congress to Syria—or, at the very least, sending the major congressional leaders in both parties—is the correct course of action,” survey respondent and Iraq war veteran Maj. Gen. John Mill said, noting that his opinion was informed by four tours of duty in which he saw dozens of close friends sustain physical as well as emotional injury and post-traumatic stress. “There is a clear solution to our problems staring us right in the face here, and we need to take action.”

“Sooner rather than later, too,” Mill added. “This war isn’t going to last forever.”

2 thoughts on “HILARIOUS: ‘Poll: Majority Of Americans Approve Of Sending Congress To Syria’ (THE ONION)”