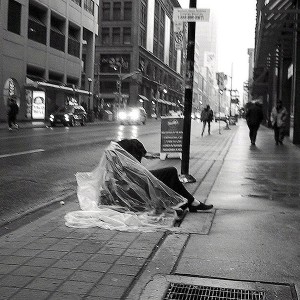 – It Is Illegal To Feed The Homeless In Cities All Over The United States (Economic Collapse, Aug 27, 2013):

What would you do if a police officer threatened to arrest you for trying to share a sandwich with a desperately hungry homeless woman that really needed it?  Such a notion sounds absolutely bizarre, but this is actually happening in major cities all over the United States.  More than 50 large U.S. cities have adopted “anti-camping” or “anti-food sharing” laws in recent years, and in many of these cities the police are strictly enforcing these laws.  Sometimes the goal appears to be to get the homeless people to go away.  Apparently the heartless politicians that are passing these laws believe that if the homeless can’t get any more free food and if they keep getting thrown into prison for “illegal camping” they will eventually decide to go somewhere else where they won’t be hassled so much.  This is yet another example of how heartless our society is becoming.  The middle class is being absolutely shredded and poverty is absolutely exploding, but meanwhile the hearts of many Americans are growing very cold.  If this continues, what is the future of America going to look like?

An organization called Love Wins Ministries made national headlines recently when police in Raleigh, North Carolina threatened to arrest them if they distributed sausage biscuits and coffee to homeless people living in the heart of the city.  Love Wins Ministries had been doing this for years, but now it is apparently illegal.  The following is from someone who was actually there:

On the morning of Saturday, August, 24, Love Wins showed up at Moore Square at 9:00 a.m., just like we have done virtually every Saturday and Sunday for the last six years. We provide, without cost or obligation, hot coffee and a breakfast sandwich to anyone who wants one. We keep this promise to our community in cooperation with five different, large suburban churches that help us with manpower and funding.

On that morning three officers from Raleigh Police Department prevented us from doing our work, for the first time ever. An officer said, quite bluntly, that if we attempted to distribute food, we would be arrested.

Our partnering church brought 100 sausage biscuits and large amounts of coffee. We asked the officers for permission to disperse the biscuits to the over 70 people who had lined up, waiting to eat. They said no. I had to face those who were waiting and tell them that I could not feed them, or I would be arrested.

Does reading that upset you?

And this is not just happening in Raleigh – this is literally happening all over the country.

In Orlando, Florida laws against feeding the homeless were actually upheld in court…

Since when is it illegal to give somebody food? In Orlando FL, it has been since April 2011, when a group of activists lost a court battle against the city to overturn its 2006 laws that restrict sharing food with groups of more than 25 people. The ordinance requires those who do these “large” charitable food sharings in parks within two miles of City Hall to obtain a permit and limits each group to two permits per park for a year.

That is yet another example of how corrupt and unjust our court system has become.

The funny thing is that some of these control freak politicians actually believe that they are “helping” the homeless by passing such laws.  In New York City, Mayor Bloomberg has banned citizens from donating food directly to homeless shelters and he is actually convinced that it was the right thing to do for the homeless…

Glenn Richter arrived at a West Side synagogue on Monday to collect surplus bagels — fresh nutritious bagels — to donate to the poor. However, under a new edict from Bloomberg’s food police he can no longer donate the food to city homeless shelters.

Do you really think that the homeless care about the “salt, fat and fiber content” of their food?

They just want to eat.

It would be one thing if there were just a few isolated cities around the nation that were passing these kinds of laws.  Unfortunately, that is not the case.  In fact, according to USA Today, more than 50 large cities have passed such laws…

Atlanta, Phoenix, San Diego, Los Angeles, Miami, Oklahoma City and more than 50 other cities have previously adopted some kind of anti-camping or anti-food-sharing laws, according to the National Law Center on Homelessness & Poverty.

You can find many more examples of this phenomenon in one of my previous articles.

What in the world is happening to America?

The way that we treat the most vulnerable members of our society says a lot about who we are as a nation.

Sadly, it is not just our politicians that are becoming heartless.  Below, I have posted a copy of a letter that was sent to a family with a severely autistic child.  This happened up in Canada, but I think that it is a perfect example of how cold and heartless society is becoming… 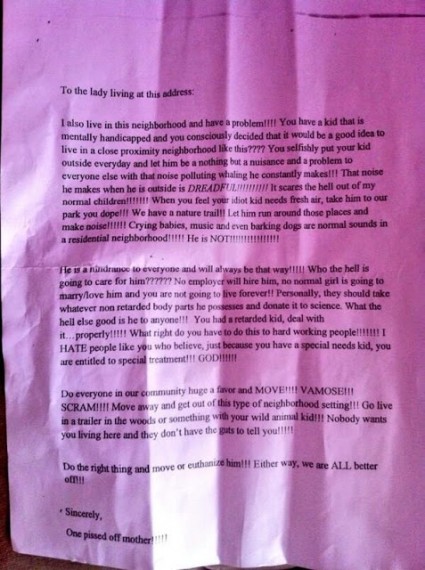 Can you believe that?

Hearts are growing cold at the same time that the need for love and compassion in our society is growing.

As I proved the other day, there has not been any economic recovery for most Americans, and a recent CNBC article echoed those sentiments…

How strong the economic recovery has been since the Great Recession ended in 2009 probably depends on viewpoint.

For those in the top 5 percent, the recovery has been pretty good.

As for the other 95 percent, well … maybe not so much.

Even though corporate profits have soared to record levels in recent years and Wall Street has boomed thanks to Federal Reserve money printing, most Americans are still really struggling.  The following very startling chart comes via Jim Quinn’s Burning Platform blog… 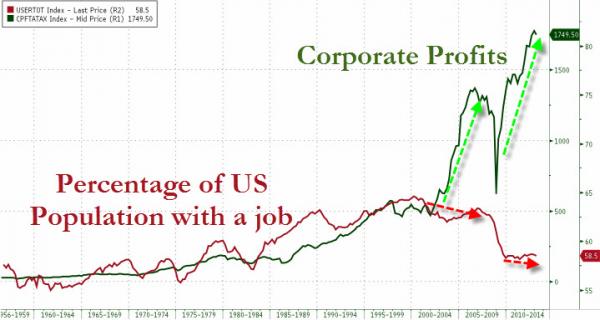 The mainstream media continually insists that we are in an “economic recovery” and that the economy “is growing”, but median household income is actually 4.4 percent lower than it was when the last recession officially “ended”.

There aren’t nearly enough jobs for everyone anymore, and the quality of the jobs that do exist continues to decline at a frightening pace.

As a result, more Americans are being forced to turn to the government for help than ever before.  At this point, more than 100 million Americans are on welfare, and that does not even count programs such as Medicare or Social Security.

But nobody should ever look down on those that are getting government assistance.

In fact, according to the Associated Press, four out of every five adults in the United States will “struggle with joblessness, near poverty or reliance on welfare for at least parts of their lives”.

So don’t ever be afraid to feed the homeless or to assist someone in need.

Someday you might be the one that needs the help.